This idnbebskfh
essayÂ comes to us from Natalie Johnson, a mom of three who wants to Free-Range, but feels some of the ever-more-common misgivings about letting her kids out of her sight. Natalie works at The Wild Network, a non-profit in the UK that helps communities get the tools and inspiration they need to “re-wild” children in their own neighborhoods. The group was launched after the success of the documentary Project Wild Thing, which looksÂ at the reasons today’s kids don’t play outside as much as previous generations. Their website is here, their Twitter feed is @wearewildthing, and here they are on Facebook: facebook.com/thewildnetwork.

20 Minutes of Terror: when the kids walked home alone

The kids walked home from school by themselves today.

They had a deadline of 4pm, after which I told them I would call the Police.

This was a ridiculous statement because, of course, I wouldnâ€™t call the Police. I would get in the car and drive the streets of our town, while screaming hysterically to my husband on the phone (possibly not even hands-free) and calling all friends, neighbours and grandparents living within 5 km. I would then put a desperate plea out on Facebook and Twitter with a photo of them in their school uniform. Then, undoubtedly, red-eyed and exhausted, I would eventually find them in the local shop, arguing over sweets. Probably.

I still felt a tiny bit sick about it though.

Why? Because my best friend raised an eyebrow when I proudly told her of our decision. Then, after clearly trying to hold it back blurted, â€œErm, even F.J.?â€ Yes, even the eight-year-old. Walking. Home. Alone.

I read a lot of articles about childhood, play, education and health working here at The Wild Network. Iâ€˜m lucky that I know the scare stories and the media horrors we see are incredibly rare. I also know that the majority of children tragically killed in this country are killed by people they know â€“ by their own family. Similarly, abusers are more often than not people known to the child â€“ and frequently their own family.

So why am I seen as so reckless by our neighbours and other parents (and teachers, too) at the school gates? We have codes, we have rules and we have expectations. We also have something that kids arenâ€™t really allowed today: trust.

And, while my eldest daughter has a mobile for emergencies (usually texting Gran “Mummy is soÂ mean” messages), I donâ€™t have a FIND MY KIDNAPPED DAUGHTER app installed like Jack Bauer in a British version of 24. I donâ€™t insist that she calls every 50 paces to update me on her location.

I trust them to make well-considered decisions.

I trust them not to get into anyoneâ€™s car. Only grandparentsâ€™ and parentsâ€™ cars are allowed. â€œNot even Auntie Claire, mummy?â€ Nope. Not even cool Auntie Claire in her cool sports car. Not even super-cool Uncle Iain,Â their dad’s closest friend, whom he would trust with his ownÂ life (and his preciousÂ kids). Noâ€“one. Rules.

They have a slightly neurotic grandpa (who raised two daughters safely, as he likes to remind me) informing them they canâ€™t ever walk anywhere.Â  He makes hisÂ unease distinctly noticeable, as my mum tries to placate him. â€œItâ€™s a different world today, Natalie,â€ he tells me. Itâ€™s really not. [Lenore here: Here are the stats!]

I know that the biggest danger is, in fact, the traffic as they walk down our street. We live in a decent neighbourhood. Our barrier to getting outside is not a lack ofÂ space, nor is itÂ gangs, or knife crime. We are the lucky ones. Our barrier is only the traffic.

I trust that we taught the girls how to cross a road.

They felt real pride when a lady stopped her car to let them cross a driveway and told them, â€œIâ€™ve never seen such well behaved children cross the road, well done girlsâ€. They also learned how to politely decline a lift home from a family friend, who proceeded to come straight over and tell us all about it, with â€˜well done sweetsâ€™ for them when they arrived. Sounds creepy, doesnâ€™t it? It sounds creepy because weâ€™ve been conditioned by some very awful stories to be paranoid about everyone and everything. We owe it to our kids that we donâ€™t create a world of mistrust and misrepresentation, where they are genuinely afraid to leave the house and enjoy the fresh air and natural world. And the first part of that is letting them experience freedom and trust and responsibility.

We owe them that.

What I really hope to come from this big decisionÂ is that other parents will see our girls walking home. Once theyâ€™ve all got over the shock and stopped talking about us, they will hopefully get used to seeing them. And I hope that the other kids at school will ask their parents when theyâ€™ll be allowed to walk home. And eventually, I hope to feel less terror during those 20 minutes.

Then perhaps weâ€™ll start to see kids out on the streets again.

As my dad always said, â€œJust donâ€™t walk home alone, girlsâ€. With more kids back out on the streets, even he wouldnâ€™t complain. –

My guess is that after this first “letting go,” it won’t occur to Natalie to feel actual terror again, because reality will have replaced the worst-first thinking. That’s the whole idea behind this blog, and the Free-Range Kids Project: Once you let your kids do something YOU did at their age, even something as simple as walking the dog or running an errand, the fear gets replaced by the pride you feel in seeing your kid grow up and become self-reliant.

So kudos to Natalie for re-wilding her kids. And if you want to do the same, just find another local family game to try it with you and send the kids out. It’s not a big deal. 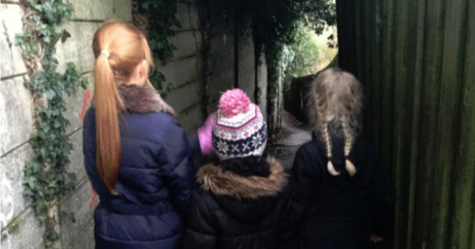 Look! children in the wild!