Readers — This is the surreal story of a 10-year-old who brought a Swiss Army Knife with him on a 5-day nature trip and was treated like a terrorist in training. According to The rkrrizhbdd
Daily Caller, the boy’s dad was summoned to cut short a business trip about 100 miles way and immediately come pick up his miscreant:

The school principal,Â Brandi Hucko, allegedly wanted Bandermann to rush to the site of the science camp, pick Braden up for a one-day suspension and then deliver him back to camp.

Bandermann told The Daily Caller that he was frustrated over Huckoâ€™s insistence â€œthat I risk my job and go get him out of the program for a one-day suspension all over a Swiss Army knife.â€

The multi-tool instrument did not present a threat, Bandermann believes.

â€œI went to the very same trip when I was a child at the same school, and I had a very similar Swiss Army knife,â€ he said. â€œIn fact, most of the kids did.â€

Principal HuckoÂ disagreed. According to Bandermann, she was adamant that punishment must be swift and severe.

In the end, the boy served at-camp detention. He was isolated from the other kids, forced to eat his meals alone for a day and sleep away from his fellow students.

This story is disturbing not just because of the bizarrely rigid idea that any knife in any circumstance = immediate threat. What’s worse is that, as the dad said, a generation ago mostÂ kids were carrying pen knives. That means that, back then, the school, the parents and the kids themselves expected young people to actually DO some things on their own — cut, whittle, sharpen, open, make, defend, tinker, fix. Taking away pen knives to keep kids “safe” is actually doing the opposite: It is making kids less safe, by turning them into helpless blobs. Now they have to wait for adults to do everything for them. The principal has effectively crippled them. Way to go!

But there is one upside to these Zero Tolerance stories. As they pile up, maybe, just maybe, administrators will start to flash on them when deciding how to handle “dangers” like a boy and his Swiss Army Knife (or Pop-Tart gun, or imaginary grenade), rather than flashing on Sandy Hook. Â – L 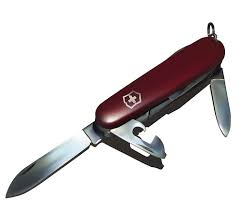 UPDATE: As far as women, men, boys, girls and knives, yours truly is A) Founder of this site. B) A woman. C) Fine with kids and knives, after they’ve been taught how to use them. Proud mom of two Scouting sons required to bring their knives to campouts!