Readers — I just read aayrkkiikb
this story and am sick to my heart. A dad brought his 5 year old son to the park then crossed the street to talk to some friends. The boy ran after him. He got struck by a car and died. Now the father is in jail and the charge has just been upgraded from “felony cruelty to children, reckless conduct and simple battery” to involuntary manslaughter.

I cannot imagine how that father would feel even if he weren’t in jail. It’s boggling. This is a tragedy pure and simple. But the issues are not so simple at all.

We live in a society that does not believe in accidents any more, or bad luck, or fate, or even, when it comes to children’s safety, “God’s will.” That’s good, in the sense that it makes us strap our kids into car seats, and take some basic precautions. But it’s corrosive in that when anything bad does happen to a child, we almost always blame the parents. The media does it, the DA does it (perhaps for political gain), and the neighbors may well do it, too. Sometimes we do it almost reflexively, as if to protect ourselves. “Well I would never do that so nothing bad will ever happen to my family.”

As if none of us has ever lost track of our kids for a sec.

Now, certainly, it makes sense to keep watch over a young child at the park. But if we slip up for a minute, if we do something human and not  intended to hurt anyone, especially our beloved child,   should that count as “cruelty”? What if it’s something that normally is NOT particularly dangerous? What if we go to the basement to put in a load of laundry and our child follows us and falls down the stairs? What if throw a ball to our child and, trying to catch it, he runs into a tree? What if we go across the street to say hi to a neighbor and unbeknownst to us our child follows and is hit, like this boy, by a car?

Is there no split-second that a parent is legally allowed to not be physically protecting his kindergartener from every possible danger? That’s a tough precedent to set. Think about even a child on a swing. Can we watch him there, knowing he COULD fall off? Or must we sit on the swing and hold him on our lap?

And didn’t a lot of us walk to school on our OWN, starting in kindergarten? I did. My husband and his siblings did. If we’d been hit by a car, no one would have arrested our parents. They would have grieved with them.

Right now, I am grieving for that boy and his family. And I am grieving for a society that is so convinced nothing bad ever happens to the children of GOOD parents that it is willing to put this man on trial.  A man who is already in hell. — Lenore 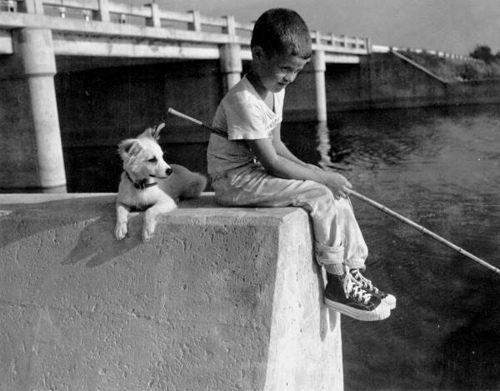 It's hard to think of any kid dying.

Jeff Lewis Comedy: Dad, What’s This Game Called “Tag”?
Why Would You EVER Put Your Child’s Photo on Facebook for the CREEPS to See?!?

139 Responses to A Boy, A Dad, A Tragedy and A Big Question