Did you noticed the Free-Range Kids’ moment at the Oscars last night? No, not the one where everyone suddenly had to problem-solve on their own and rise to the occasion — just like kids do in free play, the activity we have snatched (like an Oscar!) from them.

It was this moment, as described by Jocelyn Noveck in The azanefezdh
A.P.:

Winners often thank their moms, but Benj Pasek, one of the best original song winners from ‘‘La La Land,’’ had an especially endearing shoutout for his mother. ‘‘I want to thank my mom who is amazing and my date tonight and she let me quit the JCC soccer league to be in a school musical,’’ he said. ‘‘So this is dedicated to all the kids who sing in the rain and all the moms who let them.’’

So just who IS that Free-Range-y mom? Kathy Hirsch-Pasek, co-author with Roberta Michnick Golinkoff of Einstein Never used Flashcards: How Children Really Learn and Why They Need to Play More and Memorize Less, a book you can pretty much understand from that fantastic title. Hirsch-Pasek also founded The Ultimate Block Party, a get-kids-back-outside initiative that brought over 50,000 giddy people to Central Park its first year, 2010.

What a great reminder that playing is not a waste of time. In fact, it’s the ultimate AP class, when kids push themselves the hardest, learn the most and show us what they are really capable of.

Congratulations to Benj, his family and all those let-them-sing-in-the-rain (or at least go outside in it!) moms AND dads. – L. 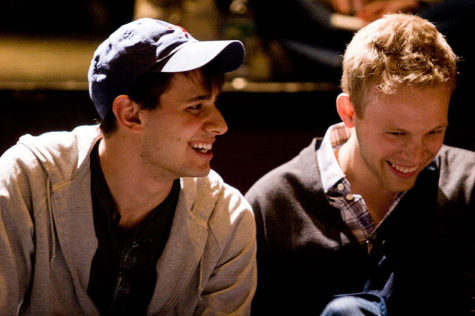 Somehow Benj Pasek (left) managed to become a success even after dropping out of his soccer league. Seen here with Justin Paul. (Photo: Wikimedia)