Folks ninfabasay
— I am putting this up as an artifact from the nexus of the worlds of parenting, insurance, and medical care. Our correspondent is Anne Boysen,a trend researcher who blogs about the youngest generation at afterthemillenials.com. – L.

The Abominable Insurance Man was never a consideration our parents had to worry about when we sledded like devils down the hills back in 1970s Norway. If neither our well-padded winter overalls nor the white powder surrounding us failed to muffle the impact, we knew that a trip to the ER wasn’t going to bankrupt us, as we would be covered under the (gasp!) universal, socialized health care system.

I have tried to maintain this relaxed attitude toward my own children’s exploration instincts. When my whole body yearned for “rescuing” my toddlers as they climbed the tall structures on the playground, I would remind myself that they needed these lessons in risk assessment and dexterity.

That is, until my daughter’s preschool called to tell me my 5-year old had fallen off the swing.  Thinking it couldn’t be too bad, I spent the drive down contemplating  the upside of taking the afternoon off and spending some quality time with my daughter. Maybe I could treat her to some frozen yogurt on the way home… But when I got there and saw that her lower leg had taken the shape of a rounded L (both tibia and fibula were broken right above the ankle) there was no doubt that an ER visit was in store – and fast, since the pre-school hadn’t given her any sort of pain remedy for fear it would interact with the pending treatment.

Suddenly a new chapter in my otherwise carefree parenting career started, and here is why.

Overcrowded, inattentive ER. When your child is screaming with pain from the top of her lungs and her shinbone is shaped like an L, the last thing on your mind is haggling with hospitals about their charges or your insurance coverage. You want pain medicine and a qualified doctor. Right.Now. So after waiting for an eternity at the mercy of blasé hospital staff who had “seen it all,” my daughter was taken back, given pain medicines and X-rays. After spending about three hours in the ER, the radiologist tells me matter-of-factly that since the fracture went through her growth plate, my Tinkerbell-sized daughter now had a decent possibility of experiencing permanently stumped growth. Oh, and by the way, we can’t treat her here.

So after transportation on stretcher ($$$) and yet another 3-4 hours at another hospital($$$), my daughter is ready to come home in a cast.

Google. Have you ever been told not to “self-diagnose” with Dr. Google? How did that work for you? My experience is that it’s amazing how much information on “physeal growth retardation” you can consume at 2 a.m. if you’re motivated enough. Motivated as in driven nuts by fears of years of invasive, painful and expensive leg lengthening procedures. And at 2 a.m. the glass is never half full, only half empty.

The Insurance Company. Did you ever read the fine print in your insurance policy? If you wait until after the fact, you will become painfully aware of what it portends. I, for one, found out that in any situation, no matter what happens — cancer, heart attack or just bone fractures as in this case — our insurance company will stop paying what-so-ever after $14,000. During the 6 months we waited for Tinkerbell’s growth plate verdict, I found significant comfort in learning that, thanks to the recent health care reform, my young child’s healthcare future will at least not be tattooed with the “pre-existing condition” stigma.

The Bills. Isn’t it ironic that bills for the co-pays always start trickling in only after recovery? I guess it’s the unlucky man’s comfort that he doesn’t go both crippled and indebted at the same time. Only in this case, we didn’t know if there would be a series of expensive treatments in the future. In any case, the hospital bills for the 6-hour long room occupation and the significantly shorter duration of care conjured up a significant price tag (albeit not in the ballpark of those whose misfortunes are more serious). For one thing we learned that “not-for-profit” hospitals feel entitled to $2-3000 admission fees, even when the triage nurse fails to notify you that they can’t treat you. So when they send you to the next hospital, with the next overpopulated waiting room, you will be charged the next admissions fee on top, even when both hospitals are in the same “system.” Not to mention the ridiculous charges that every x-ray, every drop of pain medication, every band aid and every dollop of Vaseline around your IV insertion amount to. The cost problem in American health care is so hot these days that this topic is currently featuring as the longest article ever published in Time Magazine: Why Medical Bills Are Killing Us.

To put the inflated healthcare costs in perspective. My father did a cost comparison between treatments in Texas and similar treatment if received in Norway, a country with one of the highest living expenses in the world. Yes, Norway has public health care and most treatments are paid over the tax bill. But this comparison is with private hospitals (yes, they do have private alternatives over there). In other words, we are comparing apples to apples here. Equivalent treatment at Oslo’s private hospital would be 15 times less expensive than the one performed in Austin! And that’s at minimum, because I still don’t have a full idea of how much the hospital charged our insurance.

And oh, I didn’t even mention the lawyers who suggested we legally pursue nearly every person who had been at the site of the accident. Or the fact that we as parents could be held liable if we don’t do that, as it could be seen as neglect not to seek adequate funds to cover our child’s future treatment should it be needed.

So there you have it in a nutshell. A society arrested by lawsuits, healthcare costs and the agonizing headaches of trying to figure it all out is producing a generation of bubblewrapped, underchallenged kids who lose their sledding privileges. And we’re all worse off for it.

The good news: Tinkerbell has fully recovered with no lasting ailment, and is currently testing her bike with training wheels in our backyard.  Bliss. – A.B. 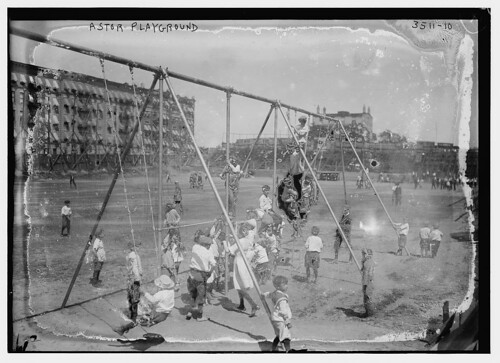 A fall from the swings didn’t always mean lawsuits and thousands of dollars.