January 21, 2013
Hi htesytybkd
Readers — This note had me shaking, a reminder that when we give our kids more and more freedom, we have to remember that lessons go with it…and so does the possibility that we didn’t cover the very lesson they’ll need. My advice? Lots of lessons (particularly about being around water), not less freedom. – Lenore
.
Dear Free-Range Kids: My Free-Range Kid got herself into some trouble yesterday, and I thought it was something your readers might want to hear about. Â My daughter is 10 years old and in 5th grade. Â She has been walking to school for 3 years, and generally is allowed to go out and about on her free time as long as she asks permission, tells me where she is going, and comes home when I way. Â Yesterday we were at our friends’ house. I was inside with the parents, she was outside with her friend. Â They asked if they could leave the yard, and went to a nearby park. Â While there, the two girls decided it would be fun to see how strong the ice on the pond was. Â Well, the answer was “not very” — it was 40 degrees (4 degree Celsius) yesterday, and the ice was thick on one side, but very thin on the other. Â They tested it out near the edge a bit, then walked across it. Â When they were almost to the other side, the ice cracked and they fell in.
.
The girls screamed, and others in the park heard them. Â Two kind strangers assisted by pulling one girl out with a stick, and going in after the other and carrying her out. Â The police were called, and they put the girls in the back of the police car with the heater on while they got statements from both and called us to come get them. Â They determined that an ambulance was NOT needed, so when we got there they told me to turn the heater on high in the car, and we took the kids home for warm showers and dry clothes.
.
They were both terrified, rightfully so — falling through thin ice is extremely dangerous and we all feel very fortunate. Â I generally avoid “worst first” thinking, and not having spent much time in the park in the winter, we hadn’t talked about ice rescue. Â However, we have talked about it now, because the girls, while doing the most important thing (making a lot of noise to attract help), did *not* know how to get themselves out when the ice broke. Â They are both researching how to properly attempt to get up onto the ice, starting with staying calm, and flattening themselves out as they pull themselves up to take up as large a surface area as possible.
.
I have gotten a couple of comments about her being too young to be expected to use good judgement, and people saying that they wouldn’t trust a 10-year-old Â in the park with a pond nearby. Â I’m happy to say that MOST people have simply said how glad they are that the girls are okay. Â I am, of course, scared of what could have happened… but what DID happen is that my daughter made a stupid decision to go out on the ice, and when a problem occurred, several very kind, helpful adults stopped to assist kids they didn’t know. Â Then our amazing first responders took over and made sure they were returned safely.
.
In these situations, one tends to revisit the decisions we make as parents. Â Hindsight is 20/20, and if I could do things differently, I would have talked more about possible “worst case” scenarios and how to handle an emergency situation. Â I would not, however, have told my daughter that she couldn’t go to the park unsupervised. Â Nor will I in the future. Â Important lessons were learned yesterday, and if anyone else wonders “if something happened to my kids, would I wish I had kept them under closer supervision?” the answer may be “no.” Â You might, however, wish you had thought of more of the possibilities and discussed them. Â Please encourage everyone (who lives in cold-weather areas) to talk to their kids about safety around iced-over ponds, to remind them to stay OFF ice that hasn’t been tested and approved for safe use, and what to do in case they are on the ice and it cracks. Â I would also hope that all kids could hear about things like this and use it as evidence that *most* people they will encounter are good, kind, and helpful, and strangers are sometimes the people that will help them to avoid a tragedy. – A Shaken but Still Free-Range Mom
. 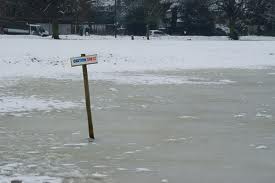 A Sandy Hook Statue from a Community in Canada? What Good Does this Do Anyone?
OUR SCHOOLS ARE SAFE ENOUGH: A Movement to Stop Overreacting to Sandy Hook

81 Responses to A Free-Range Kid Falls Through Thin Ice: The Lesson?