While I can’t be sure that these incidents of overkill are increasing, what I am certain IS happening is the demonization of men in the vicinity of children. It also seems to me that we must have a surfeit of police, at least in some neighborhoods, or why would this non-incident warrant NINE cops’ attention? From hhhikasrhy
The Daily Kos comes this story:

….After about 25 years in the NYC metropolitan area, I recently returned home to where I grew up in south Jersey. My stepfather had passed away last October, and my 88Â year-old mother didnâ€™t want to leave the house she had lived in for over 50 years. So, my two older sisters and myself decided (for various reasons) I should at least give it a try.

One beautiful autumn day, I decided to take a walk around the old neighborhood. As I did, I noticedÂ the childrenÂ at the elementary school I had attended almost 50 years ago, were at recess. This naturally brought back memories, and I was particularlyÂ struck by how they were still playing the same games I recalled so vividly: kickball, hula-hoop, etc. I was so struck by nostalgia, et al, that I decided to take a little break, and sat down beneath a tree, that was well beyondÂ from the playground, but still within clear view of the school. As I sat there a littleÂ while (musing on all sorts of things), I noticed two policemen appear to my immediate right.

At first, I thought absolutely nothing of it. AfterÂ all, this was the neighborhood I had grown up in, and had attended this very same school in. So, I was polite, and assumed their presence had something to do with something (or someone) other than me.

Of course, it had everything to do with the man — or at least his Y chromosome. The first policemen were soon joined by seven other police officers, the man’s identification was demanded, and a brief interrogation occurred, and the man himself said, “Well, I’ll certainly never do this again!”

Now I realize Iâ€™m sounding a bit perhaps impudentÂ about this. AndÂ I did thinkÂ it allÂ a ratherÂ absurd bit of drama and overkill consideringÂ the actual situation. But who couldÂ entirely (or at all) blame them?Â After all, someone from the school had contacted them about some stranger â€œloitering around the schoolyard during recess.â€ One of the cops even said to me, â€œDonâ€™t you watch the news?â€

Why? Is watching the news and getting ever more paranoid about children’s safety the only way to be a decent citizen? Is it un-American to treat public space as public space? Should we consider every man who looks at kids a criminal until proven otherwise?

AfterÂ they assured me that they wouldnâ€™t be dropping by my house, and giving my mother a wholly undeserved heart attack, they dispersed….

I realize this little episode wasnâ€™t exactly the storming of the Bastille,Â and a relatively pathetic, middle-class/middle-aged, pseudo â€œcrime sceneâ€ at that. AndÂ yes: I shouldnâ€™t have been there to begin with.Â

Wait — he came to the conclusion that he shouldn’t have been there, in his hometown, walking around his old school? That’s a terrible lesson to learn. It’s learning that society’s fear trumps freedom. 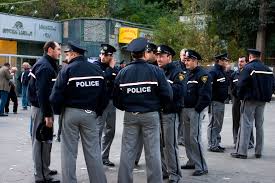 Officers! Come quickly! There’s a man sitting down near a school!Â

The Idea of “Safe Spaces” on Campus
Come to My Emu-Tional Rescue: Big Bird (but not THE Big Bird) Causes School Lockdown

67 Responses to A Guy Near a School — and Nine Policemen