Hey fhfteffrin
Readers — Here’s a note about insurance issues, and modern-day instincts, that I really appreciate. It comes to us from Ann, a mom of three girls whoÂ blogs atÂ houseofestrogen.comÂ . (What a great blog name! ) – L.

Dear Free-Range Kids: Yesterday, my 11 year old fell off a piece of playground equipment at school (she called it a â€œspinny thingâ€) and broke her ankle. When I picked her up at school, I didnâ€™t question what happened, when the playground equipment was last inspected, or who was supervising. Â I just took her to urgent care with the understanding that these things happen.

While we were there, my daughter sobbed, â€œIâ€™m never getting on that spinny thing ever again!â€ — an understandable sentiment given her level of pain and anxiety at that moment.Â  I said to her, â€œYou know what, accidents happen. They just do. Youâ€™ve probably played on that thing a million times without ever getting hurt. Today was just an accident. At least you were having fun! Can you imagine if you broke your ankle while taking out the trash? Â That wouldnâ€™t be worth it at all. I bet when it happened though, you were having fun, laughing with your friends.â€

And thatâ€™s when it hit me: Her immediate, instinctive response of â€œIâ€™m never getting on that again!â€ is the response weâ€™re seeing from parents and schools when accidents like this happen. I could have stormed into that school, demanded to have that piece of playground equipment removed and contacted the media about the dangersÂ  of all â€œspinny thingsâ€ on playgrounds.Â  I think her response of never wanting to get on there again was reasonable for her age, her maturity, and her view of how this injury is impacting her world.Â  As adults though, we need to take a step back and figure out what is really a true danger, and what is just an accident. It is as though people have forgotten the phrase, â€œaccidents happen.â€

Thanks for opening my eyes to Free-Range thinking. — Ann 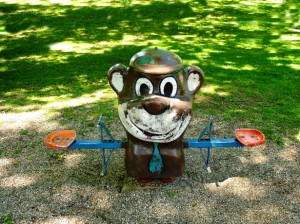 I may look creepy, but I am not here to hurt you.

37 Responses to A Playground Accident and the Instinct to Blame