Readers — Add thisÂ to ykkybyzynr
the ever-longer list of items that start from the assumption that kids are in constant danger so parents must be in constant control:
\

Needless to say (perhaps) I am dismayed by this device, not only because it gives kids the wrong impression — “I don’t have to learn to be safe, my parents will do it for me!” — but also because this thing actually stops the bike from going ANYWHERE once the child is more than 50 meters away.

The idea of keeping kids ever closer is seductive because it gives parents a sense of control along with a sense of safety, confidence and efficacy. It happens to do this by sucking all those qualities out of the kids’ lives.

Somehow, young people have learned how to find their way around the neighborhood — any and every neighborhood — since time began. But this generation isn’t trusted to do that. Call it the house arrest generation. They are as safe and secure as prisoners. – L. 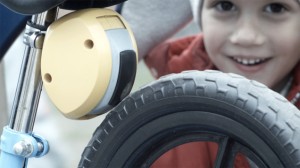 Mom Ducks Into Library for 3 Mins, is Charged with “Endangering” Child Waiting in Car
Is It Normal Not to Hire Boys as Babysitters?

67 Responses to A Remote Control Brake for Your Kid’s Bike?