Teacher tszeyyrbih
Tom — “Teaching and learning from preschoolers” — is a joy to read, especially in this case, where we find him bravely confronting that modern day terror: A swing.

You may recall that Richland and Spokane Washington school districts both phased out their swingsets. As a spokesman for the Richland district explained at the time:

“[I]tâ€™s just really a safety issue, swings have been determined to be the most unsafe of all the playground equipment on a playground.â€

But here’s how Teacher Tom dealt with the “threat.”

When our school moved into its current location, it came with a swing set. It was about this time that playgrounds around the country were removing their old sets over safety concerns and there was some talk about whether or not we should keep it, but it didn’t take much research on our part to realize that there was little more than “catastrophic thinking” behind the removal trend. Like so many things related to children and education, adults had allowed themselves to envision the worst case scenario, freaked out about it, then sought to “protect” kids from their imaginations.

That’s hitting the nail (as opposed to the child) on the head: Catastrophic, or what I call “worst-first thinking,” has us going to the worst case scenario first, and proceeding as if it’s likely to happen — as those Washington school districts did. But as TT reports:

We’ve been living with our swing set now for six years. There have been a few minor bumps and bruises, of course. They’re children at play after all and most things they do can result in bumps and bruises. Indeed, that’s one of the primary functions of childhood play: to give children an opportunity to learn, through experience, how to keep themselves safe, and part of that learning comes in the form of bumps and bruises.

Well, did the school at least set up elaborate rules for who can play and when and how, and what about the 6″ deep mulch requirements that preventedÂ this daycare centerÂ from allowing its kids on the playground equipment?

We’ve never felt a need to create any particular rules around the swing set, even as we were tempted during our early years of living with it. We saw that the children figure out very quickly that they needed to be on their toes when playing around the swings, especially if one of the big kids who has learned to “pump” is on there.

And there you have it. We can consider everything (and everyone) our kids encounter as potential dangers or potential learning experiences. Things that have been part of childhood for eons — swings, strangers, walking to school — aren’t suddenly more dangerous than ever. Nor are kids more stupid or fragile.

Time to give them some credit — and some playground equipment. 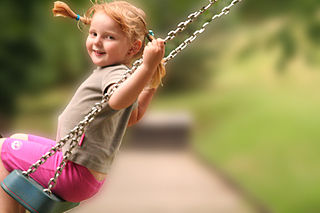 Turns out this is not a lethal weapon.Â

“Firefighters Smashed My Window to Pull My Napping Son Out of the Parked Car, as If It Was an Emergency”
European vs. American Parenting: You May Be Embarrassed

37 Responses to A School Decides to Keep its “Dangerous” Swing