Hang rratyteann
onto your goat. This story will totally get yours. It got mine.

Dear Free-Range Kids: Every Friday, I pick my niece up from school. She is in 1st grade.

Last Friday I was substitute teaching at her school, in her classroom no less.Â The fire alarm went off.Â  Smoke from a building project was venting into the school building.Â  It was determined that the fumes were negatively impacting the learning environment and school was dismissed early.I am on my niece’s emergency contact list. I am on her list of people allowed to pick her up.Â  I texted Sister in Law at work and told her not to worry about evacuation.Â  I wouldÂ  bring niece home, as I do every Friday.

Until I went to sign her out (evacuation is considered early release and requires sign out) and I was refused — by my coworkers and friends who have known me a decade.Â  I was informed that they could not release my niece to me, despite her mother’s written consent in the form of emergency contact release, because they hadn’t spoken to her mother.Â  What is the point of an emergency contact if it isn’t “someone to call when you can’t reach the parent/guardian”? What if the emergency were that her parents were in a serious car accident?

This is an extension of the bizarre cell phone culture that we live in that assumes all people are reachable at all times.Â  As noted above [in the post about requiring a chaperon to wait at the bus stop every afternoon], many people are not always reachable at their place of work, sometimes cell phone batteries die, sometimes cell phone coverage is spotty. It turned into a major hassle trying to reach sister in law at her new job, Â where she doesn’t carry her phone.

Â I wasn’t deciding if my niece would have an appendectomy, Â I was picking her up from school.

All I can do here is make a plea: If you have a brain and a heart, use them at all times. Do not defer to a policy, out of some misguided belief that rigidity and stupidity trump compassion and common sense.Â

And if you want to read a whole book about that topic, check out The Rule of Nobody, by Philip Howard. It is a fantastic argument in favor of us exercising our authority, instead of shrugging, “I didn’t realize I could do that.” 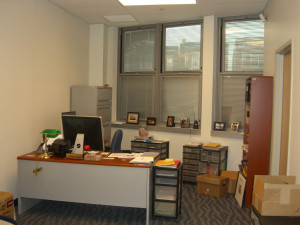 Who is willing to take responsibility for an “unauthorized” sign-out?

Meet Your Kindergartener at the Bus…or ELSE
How to Respond to Two Needle-in-Halloween Candy Incidents?