This tzfbhshteh
note comes to us from Reilly Capps, who was a Robert Novak Journalism Fellow.

This is about the new ability of Amber Alerts to come to your phone, which you’ve talked about before. It’s disconcerting, and in some cases, unnecessary.

Thursday night around 9:45 p.m., the cell phones of thousands of Coloradans blared a warning sound. It was louder and more insistent than a normal ringtone — more like the sound of the “test of the emergency broadcast system” on TV.

The pop-upÂ informedÂ us that there was an Amber Alert about a baby abducted in Oklahoma, being driven somewhere in a Hyundai Santa Fe — possibly through Colorado. This was disturbing news. Many of us searched out details in the case, and they seemed awful: a 5-month-old baby had been kidnapped by a mentally disturbed woman who had talked about the child dying.

But here’s the thing: like some portion of all Amber Alerts, this one turned out to be absolutelyÂ nothing.

Cops found the baby in Texas. Most news stories tended to talk about how this baby was “recovered” “safe” and the “suspects were apprehended.” Which makes it sound like murderous mad women are dashing around stealing babies, and constant vigilance is the only thing saving their lives. The TV, radio and Internet have long told us these kinds of stories. Now our blaring phones are telling us so.

But, according to more thorough follow-up news reports (which wereÂ contradictory,Â confusingÂ and which, of course, did not get anything close to the level of attention of the blaring cell phone warning), the baby wasn’t in any danger, ever. She wasn’t kidnapped. She was just in the midst of a broken chain of uncertain custody. It’s convoluted: the baby’s mom is in prison, and the baby was being taken from her grandma in Oklahoma to her ex-stepmom in Texas by her grandma’s sisters-in-law.

It’s not clear, from the news stories, why anyone thought the baby might be in Colorado, or who the “mentally disturbed” person supposedly was.

In fact, here’s the possibly saddest part of the story: apparently,Â NOBODYÂ has taken legal custody of the baby since mom went to jail. So perhaps, technically, anybody who has this baby is committing some infraction.

This wasn’t a terrifying crisis. It was, like so much more of life, just a royal mess.

Kidnappings happen, and they’re terrible, and if an alert system can help recover kids, and it has, then great. But how many people, over how many states, need to panic? And how often?

And, for us panickers, how about a follow-up text? Why didn’t whoever buzzed our phones the first time send a soothing tone with the message “The Amber Alert baby from yesterday was never in any danger, never close to you, and there was no madwoman. Kidnappings are rare. Crime is declining overall. This kid — and most kids — are alright.” 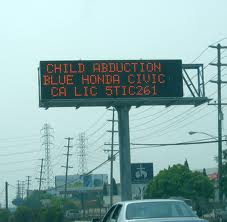 Enough About the Short “Window” of Time Kids Have to Learn One Skill or Another!
“Suspicious Man at Portland School Turns Out to be Superhero” — Best Headline Ever?