The signs at every playground in my city, New York, say this: snbdeezhza
â€œPlayground rules prohibit adults except in the company of children.â€

Apparently, any adult who simply wants to sit on a bench and watch kids play could be a creep, so just ban ’em all. The idea that children and adults go naturally together has been replaced by distrust and disgust.

There was a case here a few years ago when seven men who always played chess in the park were fined forâ€¦wait for itâ€¦playing chess in the park. Their chess tables â€“ concrete ones, placed there by the city â€“ were deemed too close to the kids, so the men were booted.

It didnâ€™t matter that they hadnâ€™t caused any trouble. In fact, the grizzled guys had taken it upon themselves to teach some of the local kids how to play the game of kings. Big deal. All that mattered was the fantasies conjured up by â€œWhat if?â€ thinking: What if they turned out to be monsters?

By separating the generations this way, we are creating a new society, one that actively distrusts anyone who wants to help a kid other than his own. Compare this anxiety with what goes on in Japan. There, the youngest kids wear bright yellow hats when they go to school.

“DOESN’T THAT PUT THEM IN DANGER?”

That’s what a friend asked. To her, a kid who calls attention to himself is a kid who could be attracting a predator. Itâ€™s like she really thinks kids should play outside in camouflage.

But attracting adult attention is exactly what the yellow hats are meant to do. In Japan, the assumption is that the easier it is to see children, the easier it is for grownups to look out for them. Children are seen as a collective responsibility. Here, they’re seen as private property under constant threat of theft.

Which brings me to the flip side of our obsession with stranger danger: The idea that any time a parent lets her kids do anything on their own, she is actually requiring the rest of us grownups to â€œbabysitâ€ them, for free.

WHY SHOULD I HAVE TO BABYSIT YOUR FREE-RANGE KID?Â

All that mattered was that this time, a store employee asked his age and when it was under 12 â€“ the magical age when Lego allows consumers to fork over cash on their own â€“ he was deemed an unbearable burden to the store. The manager had him detained him until his father could come pick him up.

This detention outraged many people, but a significant contingent sided with the store, saying that the employees there shouldnâ€™t have to â€œbabysitâ€ the boy.

But, but Â â€“ no one did have to babysit him. He was just a person in public, albeit a young one. He was fine.

If some problem had come up â€“ say he poked himself in the eye with a little Lego nightstick — well, then, yes, some adult may have had to come to his aid. But that is not babysitting! That is one human being helping another, who happens to be under 12.

Most kids making their way to school or playing in the park are not going to need major assistance from anyone, adult or otherwise. But if they do, Iâ€™d like to think most of us would give it ungrudgingly. Their parents have not foisted a huge burden on society by letting their kids be part of it.

Old and young have always interacted. Adults who enjoy being around kids are, for the most part, just that. Not predators.

And kids who are out and about in the world are, for the most part, just that. Not a big, unpaid job for the rest of us.

Iâ€™m not sure about the yellow hats, but Japan has the right idea. Looking out for everyone beats trusting no one. – L 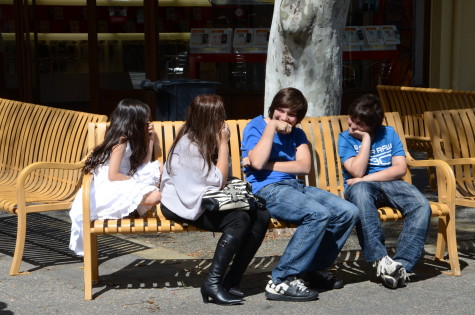 Oh God. More kids we have to babysit.

80 Responses to Are Kids in Public a “Babysitting” Burden for the Rest of Us?