Readers — This tfszkthtan
is a story that happened in 2012 in Canada: Ryan Gibbons, a 12 year old with asthma, was not allowed to carry his life saving medicine at school.

School policy was to keep the inhalers under lock and key and staff repeatedly confiscated spare inhalers from Ryan, added Gibbons. “I received many a phone call stating Ryan had taken an inhaler to school and they found it in his bag and would like me to come pick it up because he wasn’t even allowed to bring it home with him,” [his mother] said. “There’s supposed to be one in the office and that’s the only one he can have. I didn’t understand why.”

One day, the young man had an asthma attack on the playground. As the CBC reports: “No one could get his inhaler in time because it was locked in the principal’s office.” For safety’s sake, I guess. He was so goshdarn safe from a farfetched fear — that somehow having his medicine with him would compromise his safety or the other students’ — that he died. He is a martyr to bureaucratic reasoning. Why would a school keep lifesaving medicine AWAY from a student who needs it? The “medicine is a drug. and drugs are dangerous” equation seems to illustrate the same modern day mentality that insists on treating all threats as equal and enormous, without pausing one moment to think about how life really works. It’s draconian dumbness. Think about it: Parents are arrested for letting their kids wait in the car for five minutes, as if this is the same as five hours. Schools go on lockdown whether there is a madman on the playground, or a burglar somewhere in the suburb. A mom is jailed for letting her kid walk to the park, or play there, as if this is the same as sending their kids into a crack den. We refuse to acknowledge the difference between an everyday situation that presents a tiny speck of risk (as do almost ALL activities), and ones that pose a true threat. Now Ryan’s mom is pushing for new regs that would allow asthmatic students to carry puffers. I’d like to see a rule that allows all kids who need medicine to carry it. In fact, I’d like us to wipe out all the rules that grossly overestimate risk and underestimate our kids, our communities and plain old resilience. – L 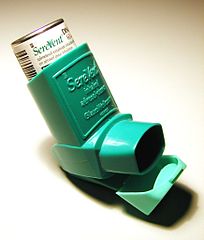