At United Airlines, 15-year-olds yfitzhhebi
will now have to be accompanied on and off the plane by a paid escort. (That sounds a little weird!) Until this month, the requirement was only for kids aged 5-12.

This new rule will cost parents $150 a trip, which is such a total rip-off that the mind boggles even as the fingers Google. Let’s see: Can 15-year-olds possibly make their way solo from security to the gate? Here’s the list a fantastic site called Museum of Conceptual Art spits out when you put the age “15” into its “Things Other People Accomplished When They Were Your Age” rubric. (Which is both fun and depressing.)

Chess champion Bobby Fischer became an international grandmaster and dropped out of high school to devote himself to professional competition.

Swedish tennis star Bjorn Borg dropped out of school to concentrate on tennis.

Henry Ford, disliking life on the farm, moved to Detroit and trained as a machinist.

Benjamin Franklin contributed anonymously to a local newspaper, and he wrote ballads and peddled them in the streets. Also at this age, he became a free-thinker and a vegetarian.

Edith Piaf began her career singing in the streets of Paris.

Eddie Murphy performed his own comedy routines at youth centers in New York.

Baker’s apprentice Hanson Crockett Gregory invented the first ring doughnuts by knocking the center out of a fried doughnut.

Anne Frank wrote the final entry in her diary.

D. Eversz gave herself a concussion in Foot Locker after attempting to do a backflip off the counter. [Lenore here: Not sure why that’s on the list!]

A 15-year-old boy in southern India performed a Caesarean section on film, in an attempt to get his name in the Guinness Book of World Records as the youngest surgeon. The surgery was successful, but his physician father may face criminal charges and have his license revoked.

Then again, maybe United is afraid of kids running away. After all, at age 14, according to that same wonderful “Accomplishment” calculator:

American statesman and military commander Sam Houston ran away from home to live with the Cherokee Indians.

Danish fairy tale author Hans Christian Andersen ran away to Copenhagen and became an apprentice at the Royal Theater.

W. R. Grace, founder of the Grace shipping lines, ran away to sea.

By the way, American and Delta both require chaperons till age 14, so they are almost as insulting/greedy as United. And, according to The LA Times, Air New Zealand is giving unaccompanied minors a special wrist band that texts their parents throughout the flight to let them know where they are. “Oh, Jordyn just crossed the 15th Parallel North. Phew!”

Wasn’t I just saying in my last post, the one about the wearable thermometer that gives parents a continuous readout of their kid’s temperature, that soon parents will be expected to be as all-seeing, all-knowing, all-controlling as God?

Yes I was. Parents must be God and their kids are helpless babies, beset by adversity they cannot face alone, like trying to find a tuna sandwich near the gate that doesn’t cost $12. And now the definition of a helpless baby has been extended to 15.Â Wait a few years and kids won’t be able to travel unaccompanied until they are shipping out to Afghanistan. – Â L. 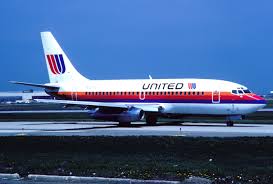 Fly the infantilizing skies of United!

Again with the Fever Thingy?
“No One Under 17 Should Be Unaccompanied at the Mall”