Readers ihayeeanyd
— Some day, sooner rather than later, I would like the idea of not trusting men around kids to be considered as repulsive as racism. At that time, opinion pieces like this one will seem completely wild and disgusting by all but the lunatic fringe. – L.

I Don’t Want My Kids Sitting Next to a Man on a  Plane, by Tracey Spicer

I know it’s sexist. But I don’t want my kids sitting next to a man on a plane.

Sure, almost 90 per cent of child sexual abuse is committed by someone in, or known to, the family, according to the Australian Bureau of Statistics.

However, stranger danger is a risk and women are perpetrators in only about 8 per cent of cases, says the ABS data.

In 2001, Northwest Airlines paid a US family half a million dollars after a 10-year-old girl was molested by a 28-year-old man on a flight from Kansas to Detroit.

…My nine-year-old Taj and seven-year-old Grace flew as unaccompanied minors, for the first time, on Virgin last year. They were put in the last row with a bunch of other kids where doting staff plied them with treats.

It was a relief to see their smiling faces at the end but I was disappointed I had no choice about where they’d be sitting.

Read the rest here. You may need an airsickness bag.  – L. 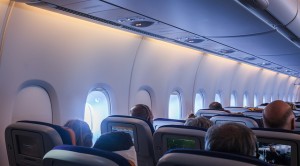 God forbid a MAN sits in a seat next to an innocent (or at least UNTIL THAT MOMENT innocent) child!