The sign below signals the end of childhood — and parenting — as we know them. Apparently in Queensland, Australia, children are not allowed to walk or bike to school under age 12, and parents are not allowed to let them, according to this police notice, posted on Twitter by Stephen B @BicycleAdagio: 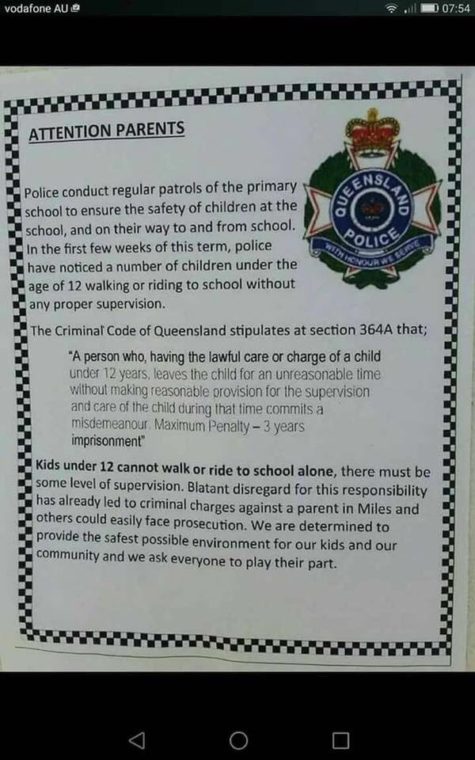 This is a new world view and it criminalizes not just parents who believe in their kids, but parents who believe in rational risk assessment. Our children today live in the safest times in human history. To treat them as if they are endangered merely by going outside on their own ignores reality. It also ignores the fact that the number one way kids die is as car passengers, as many parents who are forbidden to let their kids walk will inevitably end up driving (and thereby endangering) them.

Finally, is it really the job of the police to provide THE safest environment possible? So should they make kids scoot down the stairs on their bottoms till age 12? Should they force kids to wear helmets in class, in case of falling ceiling chunks? Should they require the lunch ladies to put the fish fillet sandwiches in the the blender before serving, to minimize the chance of a child choking? When does “safest possible” become TOO safe?

I’d say in Queensland, that moment has arrived. – L

A Kindergarten Field Trip with Knives and Nudity*
UPDATE: Lowering the Bar for “Attempted Luring”

58 Responses to “ATTENTION PARENTS: Kids Under 12 Cannot Walk or Ride to School on Their Own”