Â Dear Free-Range Kids:Â This article appeared on my FB. Â http://www.kcci.com/article/mom-charged-after-child-dies-in-changing-table-incident/8588247Â
Â
The highlight:Â â€œThe fact that she left the child alone for an extended period of time is what makes it criminal,â€ Des Moines police Sgt. Paul Parizek said.”
Â
My thoughts: She should not be charged as a criminal.Â  This is an ACCIDENT.Â  She did not INTEND for her daughter to die.Â  They don’t describe how long the child was left, but I’d take the mom at her word that it wasn’t very long, probably a few minutes.Â  If leaving a child for a few minutes is considered criminal then, will someone please explain to me as a new mother of a 6 month old how the heck I’m supposed to get anything done? Â (laundry? working from home? sleeping? Â cooking?) Â Is it expected that I keep my eyes on my baby all the time? Â
Â Â
Lisa

Here is part of the heartbreaking article:

A Des Moines mother has been charged months after her child died when she suffocated on a changing table.

The incident happened in September in the 800 block of East Lacona Avenue. Charges were filed Wednesday in the case.

According to court documents, Taylor left the child unattended on a changing table. While she was out of the room, the child rolled over, and as a result, her neck was compressed on the ledge of the changing table, cutting off her airway. Police said the incident resulted in the childâ€™s death.

The incident did cause the child’s death. The mom, I would say, did not. Here’s her husband’s take:

Don Taylor, said his childâ€™s death was a horrible freak accident that could happen to anyone.

â€œI have no ounce in my body that blames my wife at all,â€ Taylorâ€™s husband Don said.

Bless that man. He has been living with his sorrow and horror for four months. But he has not been able to be there for his wife — and vice versa — because she is in jail.

â€œShe was actually getting my daughter a bottle, and that’s what happened, and that’s why she wasn’t in the room at that point,â€ Don Taylor said.

Don Taylor said his wife was an excellent mother who doted on her two girls. The couple has tattoos remembering the 3-month-old they lost.

â€œThere is not one day that we both don’t think about her, and the memories of that day is still in our head,â€ Don Taylor said. â€œI wake up every morning with â€¦ in a panic attack because I hear my wife screaming my daughter’s name. That’s what I have to live with every day.â€

Police said the investigation took four months because they ran several medical tests on the baby and did multiple interviews. Laci Taylor is being held in the Polk County Jail in lieu of a $100,000 cash bond.

GET THAT MOTHER OUT OF JAIL! Do the cops really believe she is a threat to anyone? This is just pointless cruelty.

But the charges are even more cruel. They are based on the sickeningly simplistic, self-satisfied belief that bad things only happen to bad people, or their children. Somehow, we are happy to pretend that every decent mom does everything exactly right. If something happens while she’s not watching, well, there’s your proof: A mom took her eyes off her child and death swooped in. She shoulda known.

She faces a possible maximum of 25 years in prison.

I’m not saying it is wise to leave a baby on the changing table. Of course it isn’t. Â The cops claim she spent 15 minutes out of the room. Perhaps that’s so. What I am saying is that I have done things just as ill-thought out, dumb and/or potentially dangerous, and that doesn’t mean I’m a bad mom. It only means I’m lucky, and Laci Lynn Taylor was tragically unlucky.

Locking her up is criminal. – L 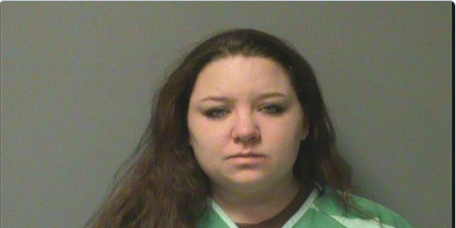 A grieving mom, stuck in jail thanks to our self-satisfied belief that bad things only happen to bad people.

School Bus is Safer Than Carpooling!
Why We Blame Moms When Their Kids Die

30 Responses to Baby Accidentally Suffocates While Mom Gets Her Bottle. Mom Charged With Her Death