Readers fkdrihkkez
— Here are two letters I just got,  with but a single lesson: You are not allowed to trust your child in even the safest of circumstances simply because someone ELSE (or that someone’s insurance policy) can IMAGINE something TERRIBLE happening, no matter how fantastical. All children are too vulnerable to be out in the world, even for a minute. Bold face is mine. – L

Dear Free-Range Kids:  I haven’t responded yet to this note from our elementary school principal.  Finding a respectful and non-snarky way to respond to the paranoia is proving difficult.  My daughter is in 1st grade and will be seven in December.  We live just two blocks from the school — rated one of the best in the state — and there’s a crossing guard.

I hope all is going well for you and the family.

I had a concerned teacher share with me that she saw your daughter walking home by herself. I wanted to touch base with you as I am hearing this second hand, and I do not want to assume anything. I know you live close, but if she is walking on her own, I have concern for her safety. She is so young and vulnerable to someone approaching her. Hopefully, it is nothing, but I wanted to drop you a line.

And here’s another note from another mom:

I had a “lovely” non-Free-Range moment this evening. I was waiting outside to pick up my son from his gymnastics class, which is run by the park district and held at the local high school. I waited. And waited. Finally, I decided that he must have forgotten that he was supposed to come out to me, so I asked a dad who was walking in to ask my son to come out. He still didn’t come out. So I put the blinkers on and went in — and saw him sitting in the gym! I called to him, but he didn’t come. I had to get back to my car, because my 20-month-old was in it (and I was parked in the pickup lane), so I was grateful when another mom said that she’d go and get him.

When he came out, it was with the head of the gymnastics program. Who proceeded to tell me that my son, 7, was “too young” to be let out by himself. “Imagine what could happen!” I told her that yes, what I imagined happening was my tired toddler yanking her hand out of mine, taking off across the parking lot, and getting hit by a car. Or, best case scenario, having to literally wrestle my tired toddler back into her carseat.

“But we are responsible for him, and he is so young. What if he gets hit in the parking lot?” (This despite the fact that I was, as always, in the pickup lane so he could get directly from the sidewalk into my car. “Sometimes the lane is blocked by school buses, when there’s a meet.” As if in that situation I wouldn’t then come inside!) She then told me that I needed to find another parent to walk him out. When pressed, she said that he would be allowed out by himself if he had a note from me, but they would really prefer if he was supervised by another parent.

Even though he would be visible from them until the moment he stepped outside, and I would be right there. And even though, using my best judgment as a parent, I had decided that the risk of him being kidnapped (miniscule) was outweighed by the risk of my toddler being idiotic in the parking lot (likely).

It really is insane, to conflate liability and small chances of harm with certain doom. I have been picking him up like this for some time, but I guess tonight is the first time we got “caught.”

Anyway, my son (who wants teachers to like him) wants me to find a family to supervise him out, but I want to send him with a note instead. How would you help me convince him that it’s okay to be independent even if the teachers think he shouldn’t be?

Readers — That’s your cue. How should these parents respond in a way that will actually CHANGE the mindset of the authorities who see only danger and liability instead of independence and ACTUAL SAFETY??? I am beginning to contemplate writing a new edition of Free-Range Kids and if that comes to be,  I want to include letters and responses that other parents can use in situations like this. So — many thanks! – L. 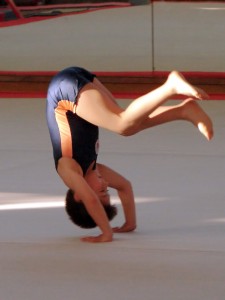 You can’t leave gymnastics without your mom coming in to walk you out.

71 Responses to Back to School: Administrators Scold Parents who Let Their Kids Venture Outside