Hi Folks –Â A hzybsfinda
school in Australia is banning balls for the 15 minutes before and after school because, according to The Age newspaper, a toddler was hit by a ball.

Of course I feel bad for the toddler. But I feel far worse for the 600 kids at this school, Black Rock Primary, in Melbourne.

It might seem like, “Well, we’re only talking about controlling the chaos during the busiest time, when all the kids are gathered and it’s so crowded.” But that is the CRUCIAL time for playing. Fifteen minutes after school, if a game hasn’t started, the kids are gone. It’s a lot harder to start a game when no one’s there. And I know that, for one of my sons at least, the day starts out a lot better if it begins with a little running around.

Also — and I say this not knowing this particular school, Â but based on what I see at elementary schools where I live — maybe one of the reasons “drop-off” is so crowded is because the children are all accompanied by adults. If the parents would let the kids arrive or at least wait on their own, there might be a lot more space for kids to play, and a lot fewer adults and toddlers to bonk.

The head of the Australian Football League, Andrew Demetriou, is begging the school to drop the ban. “I’m sick of hearing these stories!…Everyone is being spooked by lititation and insurance.”Â Now I’ll add my begging, too:

AUSTRALIA!! Do not become like my country, stymied by the twin fears of something going wrong and someone filing suit. It’s the path to stagnation! Turn back whilst ye may! Take a ball and knock yourself on the head if you must — you’ll see it’s annoying but not that big a deal! – L

P.S. And this just in! My friend just messaged me Â that her elementary school is banning tag. Same reason. It’s too “dangerous.” What ISN’T dangerous? Sitting around getting fat and diabetic from age 5 because you haven’t learned to enjoy one single OUNCE of outdoor play?

P.P.S. And people wondered why I wanted to start an afterschool class where kids would have to come up with something fun to do outside without any adult instruction, direction or snacks… 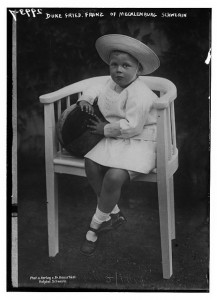 Good Morning America on “I Won’t Supervise Your Kids” Class
Who Stole America’s Faith in Everything Except Fear?