Everyone else has posted about this Oklahoma City bathroom sign, so I guess it’s time for me to weigh in, too: Are 6-year-old boys too old to be dragged into the ladies room? 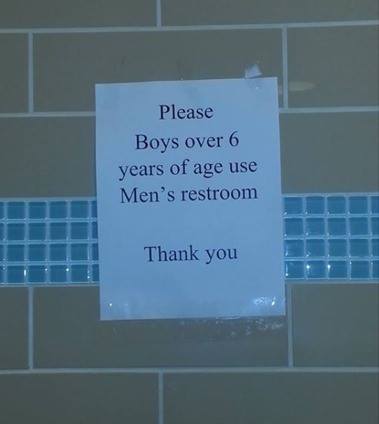 I don’t come down hard and fast because of course there can always be extenuating circumstances — a boy with special needs, for instance — and also, I just don’t think there are hard and fast rules for most things. That being said, I also think it is just fine for any boy out of diapers to use the men’s room. And while rummaging through a bunch of old columns of mine the other day, here’s one I wrote for the New York Daily News in 2002 — long before I let my 9 year old ride the subway alone:

Should you report me to the authorities?

I let my 4-year-old walk downstairs to his friend’s apartment, alone. I let my 6-year-old out of my sight on the playground. I let both boys go into public bathrooms by themselves, rather than dragging them into the ladies’ room. Moreover, I firmly believe that anyone who finds me lax is in the grips of mass hysteria and needs deprogramming, pronto.

It was fun to read my nascent Free-Range self. Less fun was finding that the controversy continues to this day. Here are some typical comments that ran beneathÂ aÂ Babble storyÂ on the Oklahoma sign controversy:

*A six year old boy in a men’s bathroom by himself in a mall??? I don’t think so.

*The way our world is today, no way would I send my child alone into a restroom!!!!!

*What do you suppose will happen in the 3 minutes he’s in there?

*In those 3 mins, they could be molested or even killed. Who’s to say there’s not a child predator in there waiting to touch your child or some sadistic person that decides they want to kill for fun. Been in the news in the past.

And so, in 2015 as in 2002, I find myself saying the same thing: Perspective, please! A few years ago I wrote again about boys in the little girls’ room for the New York Post, filling in more facts. (Oddly, the archive has the date of this story wrong by a decade.) Anyway, voila the relevant part:

Amy Baxter is a pediatrician who did her fellowship in child sexual abuse. She estimates she has seen about 500 victims, which is very sad. But how many of them were violated in a public restroom? â€œNone,â€ she says. Dr. Baxter queried two close colleagues and found that one of them had indeed seen an instance of this crime. Terrible. Another â€” a leader in the field â€” had not. Ever.

So itâ€™s not that bathrooms are 100% safe. Nothing is. But since most child sex abuse is perpetrated by someone the child knows, the worst-case restroom scenario is rare indeed.

Apparently when you’ve got guys and germs around pants-less kids, rationality goes the same place everything else in that room is going. – L.

A “THANK YOU!” FROM the Florida Mom Arrested for Letting 7 y.o. Walk to the Park
The YMCA Song…and Dance, When It Comes to Background Checks and Liability

130 Responses to Big Boys in the Little Girls Room: The Never-Ending Controversy