Readers — I don’t want Free-Range Kids to simply become a forum for the latest Zero Tolerance insanity (tempting though that is), Â so I am posting this errrkerhiy
story with a different aim. It’s to talk about how we create regulations and laws.

Briefly, a boy with autism — not sure that’s relevant — drew a bomb that looks like the ones in his favorite video game, Bomber Man. (Similar bombs have been deployed by Â Wile E. Coyote.): 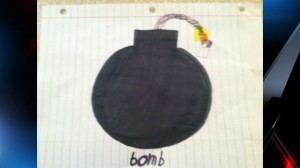 Obviously, the drawing of a bomb is NOT a bomb, which is why the suspension is so ridiculous. But Â according to the boy’s mom, the school explained its reasoning thusly: “Perception is reality.”

That gave me an idea for a Free-Range Kids motto: Perception is NOT Reality.

The problem is when schools and lawmakers use their perception of danger â€” skewed and twisted by a skewed and twisted media â€” to make REAL rules. Getting risk wrong has real-world consequences. As Jeff Stier, head of the Risk Analysis Division of the National Center for Public Policy Research, puts it, imaginary risk leads us down â€œa dangerously slippery slope into a world where imaginary fear dominates.Â  Children stop being children, parents can no longer parent, and almost any special interest group can label almost anything as the next lurking bogeyman.â€

Perception of problems as huge when they are small to non-existent changes childhood. Boom! Freedom explodes into a million little laws, each one capable of crippling childhood wherever it lands. – L

53 Responses to Boy Who Drew Cartoonish Bomb (at HOME!) Gets Suspended