Check out the brilliance of these British kids. According hybbtsnrfk
to the Daily Mail:

Aged between six and 12, they were on an Easter egg hunt in the middle of a field near the village of Capel, Surrey, when they spotted the helicopter circling.

I highly doubt I would have been nearly as resourceful as these “Tremendous 12,” as they’ve been dubbed by the press:

Describing what happened next, one of them, a nine-year-old girl, said: â€˜It was really noisy and we could see it said â€œpoliceâ€ on the bottom. Then we saw a man running along the side of the field. We could see him but the helicopter couldnâ€™t because it was hovering over the woods.

â€˜We saw the man take his jumper off and put it around his head. Then he dropped it and ran off into the woods and we pointed and shouted at the helicopter, â€œHeâ€™s gone that way!â€

â€˜But the helicopter looked like it was pointing in the opposite direction. Then two of my friends said, â€œLetâ€™s get into an arrowâ€ and we got into position on the ground.â€™

The quick-thinking children lay there for a minute before the pilot took notice and headed in the direction they were pointing.

Another girl, also nine, added: â€˜About five minutes later, the helicopter came back and landed in the field and the officers came to talk to us.

â€˜They said they thought we were messing around at first but they followed our arrow and caught the men. We feel really proud of what we did.â€™ 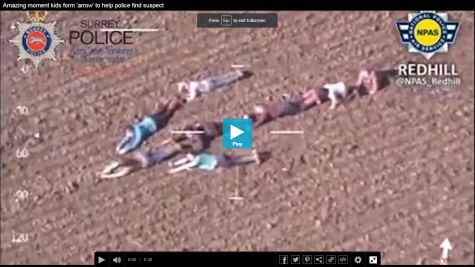 Mom Charged with Neglect for Making Her Kids Walk to School
Help Needed: How Convince Spouse to Stop Overprotecting Baby?