The song “Calling All Angels,” a hit from the group Train, has been watched on YouTube 16.7 million times, so far. It’s a moody, rain-falling, leaf-blowing song, but the bleakest part goes like this:

If you watch the video, those lines are at 2:16. Note how the child outside…disappears!

Does Train really believe that children who step outside DO disappear? I realize the song is not meant to be instructional, or even factual, but it’s sort of like singing, “When children have to sleep on mats, so they don’t die from falling off their beds.”

What I mean is: It’s wrong. It’s not dangerous to play outside. The vast, vast, VAST majority of children are just fine — actually better than fine, playing outside. They’re happy and independent and creative and tuckered out. And the fact that there will inevitably be some tragedy as some point has, alas, always been true. Also true is this: more kids (and adults) met tragic ends when the Train musicians were young than they do today, because our crime rate is at a 50-year low.

Nonetheless, “Children have to play inside” has become such a deeply held belief that in a Peggy Noonan column in last week’s Wall Street Journal, she reported the results of a focus group of voters across the political spectrum. They are a depressed lot, and one of the things weighing them down is a loss of security when it comes to kids. “They can’t just go out and play,” said one.

The only thing different today is the new and pernicious notion that any time children are not supervised they are automatically in grave danger. This misperception, fed by a deliriously dystopian media, has become so bone-deep that parents get arrested for RATIONALLY deciding to let their kids frolic in the park.

These laws and social norms turn parents into bodyguards, and kids into babies. Most of us are ecstatic that we had the freedom to play without our parents Velcroed to our side when we were kids. There’s no reason we have to raise our children any differently.

Free, unsupervised time is an American birthright: it’s when kids learn how to invent games, roll with some punches, overcome fear, understand social cues and discover their true interests. Play is also cognitively rich brain food. It teaches kids to think and connect. What’s more, it is the foundation of entrepreneurship (you’re not about to take risks if you’ve never been exposed to any) and of our happiest memories. Just because the News at 11, and now Train, are telling us we have to lock our kids in the living room is no reason to take away the best and most important part of childhood. 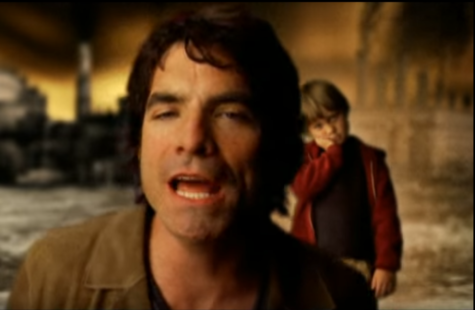 Children are disappearing! No one is safe! That’s why I look so miserable and so does the kid behind me.

Peter Gray: We Have Almost Destroyed Childhood
Beaverton, Oregon, Library Rule: Kids Under 10 Must Be “Within Sightlines of Parents” at All Times

15 Responses to Calling All Angels — “Train” Got it Wrong