Readers fkzinbdazs
— Here’s what happens when we panic, whether about security or about bumbling the security:

Dear Free-Range Kids: Something that happened this weekend made me think of you.

My husband, our almost 3-year-old son and I have been going to the Indianapolis 500 since 2011, when the little one was only 9 months old. My husband loves cars (he’s an automotive engineer), and the 500 is a big day of fun. Every year (until this one) we’ve been thrilled with the sense of camaraderie we feel with the 300,000 fans at the Indianapolis Motor Speedway, and everyone has been nothing but kind to the crazy parents bringing a baby to the 500.

This year, we arrived earlier than usual, and still nearly missed the start of the race. That’s because for the first time ever, security was thoroughly searching bags at the gate. In previous years, they would just ask (and eyeball) to see if you had glass bottles, and be done with it. This year’s drill was clearly in response to the Boston Marathon bombing, and yet it was a ridiculous overreaction. The 500 is the largest sporting event in the world. Individually checking the bags and coolers of every. single. spectator. coming through the gates would take a ridiculous amount of time (and indeed, we were in a line that stretched nearly a half mile). Though we arrived early, we were stuck outside the Speedway during the flyover and the singing of the National Anthem. What was most offensive about this year’s additional security was the fact that an announcer kept telling the waiting fans to check out their neighbors, and to say something if we saw anything suspicious. That is not the kind of paranoia I want my child growing up with.

At about 10 minutes to start time, it dawned on security that the larger safety concern was pissing off hundreds of thousands of fans who might miss the race and thereby inciting some sort of riot, so they stopped searching bags and even stopped tearing tickets, and simply started waving race fans into the gate after asking them to hold up their tickets and proclaim that they were carrying no glass bottles. It was absolutely the right call for security to relax the search, but it simply highlighted the utter insanity of the original search.

As I was telling my husband after this holdup (when we were still seething and had not yet gotten into the excitement of what turned out to be a phenomenal race), there are things to worry about when bringing our son to the 500 each year. In descending order:

1. That his hearing will be affected by our yearly pilgrimage, especially now that he’s old enough to continually pull off his headphones despite our best efforts.

3. That he might have a meltdown in the middle of a huge crowd when it will be extremely difficult to get him to a quiet place where he can calm down.

4. That he’ll fall in love with racing and break this Jewish mother’s heart by becoming an Indycar driver.

If I wanted to keep my child completely safe, we’d stay home and watch the race on TV. But we want him to experience things and meet people and know the joy of live sporting events and giant turkey legs. If that infinitesimally increases his risk of being in the wrong place at the wrong time, so be it. I want him to live his life, not watch it go by on a screen.

I’m hoping that the 2014 race will return to 2012 levels of security–particularly since we will be towing along an almost 4-year-old and an 8-month-old by then.

May this year be a lesson to the Indianapolis Motor Speedway on how not to handle fear.

Thanks, Emily Guy Birken (who writes the sahmnabulist blog)

I asked Common Good policy analyst Ben Miller to respond and he wrote:

It’s a fair bet that the motive for this “security” procedure had more to do with liability concerns than with safety. After all, thousands of people in a bottleneck of a security line are every bit as vulnerable as thousands of people watching a race on the other side of the gate. But if something goes wrong, the organizers can say, “we did everything we could”—even if what they did was completely counterproductive.

To which I reply: Yup. 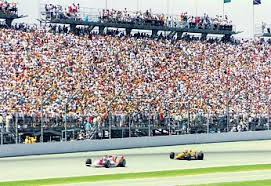 Wait…is that guy in row 43 carrying a lumpy backpack?

Help Needed: Your “I Let My Kid Wait in the Car” Stories!
Let’s Ask All Our Schools for a Day Like This

46 Responses to Came for the Car Race, Stayed for the Security Theater!