Imagine if the feds sent the following letter to American men:

Dear Fellas: Due to issues of compromised sperm quality, we are recommending that you abstain from all alcoholic beverages from the age of 15 till 45. We trust this will not have too much impact on your lifestyle. Think of the children! Yours, The Centers for Disease Control

Of course, the CDC didnâ€™t send out a letter like that on Tuesday .â€‰.â€‰. to men. It did, however, issue this warning to women: â€œStop drinking alcohol if [you] are trying to get pregnant or could get pregnant.â€ In other words: If you are of childbearing age, are not using birth control, and might possibly have sex, just donâ€™t drink.

The ostensible reason is that a woman who consumes any alcohol while pregnant could give birth to a baby with Fetal Alcohol Syndrome, a cluster of defects that include low birth weight and brain damage. And since women donâ€™t necessarily know that theyâ€™re pregnant until a few weeks or even a month has gone by, they could be drinking while knocked up.

There are three major problems here.

First, while it sounds as if thereâ€™s a direct and obvious connection between drinking and birth defects, the science is actually not conclusive. A meta-study done at Oxford examined 74 papers on the topic, and tallied up the results. What did all that data tell us?

â€œFor most outcomes, there was no consistent evidence of adverse effects from low-to-moderate prenatal alcohol consumption,â€ the authors Ron Gray and Jane Henderson wrote.

No evidence of more stillbirths, malformations, small heads, stunted growth patterns or negative neurodevelopmental outcomes. There was â€œsomeâ€ evidence to suggest that binge drinking during pregnancy could produce some adverse effects, but even those, the authors found, were â€œquite small.â€

So to me it sounds like itâ€™s a good idea not to binge drink when youâ€™re pregnant, just to be on the safe side. It does not sound like you are dooming your baby with a sip (or even a swig) of Chardonnay.

The second problem is that it reduces women to walking wombs.

â€œThe idea is that any woman of reproductive age should be treated as potentially pregnant at all times,â€ says Elizabeth Mitchell Armstrong, an associate professor of sociology at Princeton and author of â€œConceiving Risk, Bearing Responsibility.â€

Taken to the next level, perhaps the CDC would like women of childbearing age to abstain from driving, too. After all, they could get in an accident. Or what if they play Pingpong and bump into the table?

What if, God forbid, they eat at Chipotle? Better the little ladies should sit on the couch and pop folic acid till menopause.

The CDC is delivering women a ton of terror for a scintilla â€” if that â€” of safety. Women are being told they must be helicopter parents before they even have kids. Before they even get pregnant!

You can see why I consider this a Free-Range Kids issue: Our society insists that anything less than 200% perfection on the part of parents = doom for the kids. That’s the outlook that gets parents arrested for doing things like, well, yesterday I got a letter from a man who had just dropped his wife off at college when he realized: Wait! She has the house keys! So he left his toddlers, safe and warm in the car, strapped in, while he ran in.

Out again 10 minutes later, he found a couple of security guards waiting at the car, not happy. They called the cops, the cops came to the man’s home, and he was handcuffed and taken to the precinct house.

I realize I’m getting off on a tangent, but it is part of the big picture: We are ADMONISHING and even ARRESTING parents not because they literally put their children in harm’s way, but because they didn’t bend over backwards to PROVE — almost to PANTOMIME — that they are the greatest, most conscientious, most insanely obsessive parents ever to walk the earth, abstaining from a single drink, dragging their tykes in and out of the car for super-short errands, and generally acting like their kids are forever at death’s door and only their concierge-like attention to every detail, every second, can save them.

This is why I write this blog!

And this is why you can read the rest of my article here, and spread it around. Have a great weekend! And don’t leave your kid in the other room, even when you have to pee! ANYTHING could happen!- L. 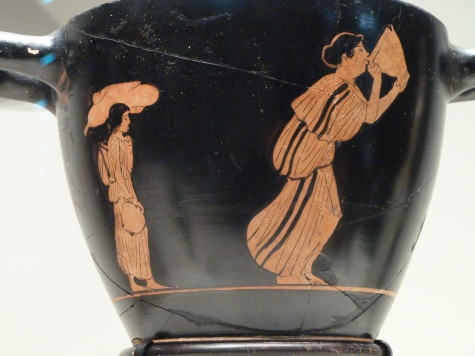 Is it too late to arrest this hussy?

94 Responses to CDC to Women of Childbearing Age: Don’t You Dare Drink!