A Houston zzddyyhdat
mom identified only as Jennifer learned to her horror that the video camera she’d installed in her daughters’ room was being live streamed around the world. As Yahoo reports:

“We have security cameras to protect them,” Jennifer, from Houston, Texas, told ABC News.

“They’re in my house. People are watching my kids in their home, dressing, sleeping, playing.”

The private webcam, aimed at the beds of her two eight-year-old girls, was intended to keep a watchful eye over them but it had been hacked and the live footage was open for anyone to view.

Now, agreed: That is a horrible thing to find out. But my sympathy for Jennifer is tempered by the idea that it would have been just dandy if the camera had only been used the way the mom intended, which was for HER to be able to watch her kids in their room any time she chose to.

I grew up knowing that behind my bedroom door I was truly alone. Even those of us who grew up sharing rooms knew that if no one else was in the room, no one else was watching. That means something. Had my mom had installed a camera, secret or otherwise, this would have been an act of gut-wrenching betrayal.

Besides, what kind of crime does this mom think the camera would have prevented? An intruder? Would she be watching every second of the night to make sure no oneÂ snuck in while the kids were asleep? Or was she simply eager to have a video to turn over to the cops in case this mind-bendingly rare event occurred? Really — what does a “watchful eye” do?

A watchful eye is a suspicious one. The only place I know of where bedrooms are routinely monitored by camera is prison.

So, yes, it is revolting that the account was hacked. But now is not the time to change the camera’s security settings. It’s time to get rid of it, along with the idea that our children are in such constant danger, we can’t take our eyes off them. Even when they are 8 years old, in their own bedroom. Â – L

This is the ABC video. 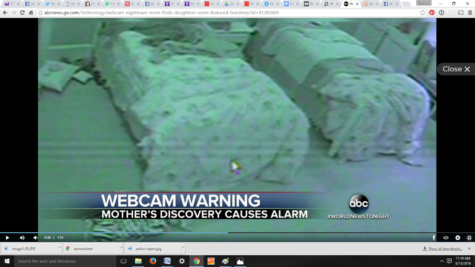