And what is the Free-Range take on clowns, you ask?

Not yuk-yuk, like funny. Yuck like why would anyone ever find a white-painted face with distorted features amusing, rather than horrifying?

But of course the bigger question now is what is going on with our culture’s clown craziness. Clowns are popping up everywhere, leading toÂ strange sightings, Â warning inhiyzfnbk
letters sent home from schoolÂ and actual arrests. That’s not to mention this weird case — a man in Kentucky shot his gun into the air when he mistook a woman walking her dog for a creepy clown. I’m sure the woman appreciated that all around.

Under the sway of what we now understand to be manipulative “therapists,” the tots told stories ofÂ being flown in hot air balloons, or taken on boat trips where babies were tossed overboard. No evidence was found for this — no drowned babies, no giraffes slaughtered at the zoo (which you’d think would be hard to miss). And yet, cops, juries and judges ate them up like bunny entrails.

Hardy har har. Except…look what happened to Fran and Dan Keller in Texas. At their 1992 trial, wrote The Guardian,Â the jury heard stories that:

Dan Keller killed his dog and made children cut it up and eat it, “baptised” kids with blood and disemboweled pets, forcing children to drink the blood.

The Kellers were also said to have decapitated and chopped up a baby, put the remains in a swimming pool and made the children jump in. In one account, the Kellers were said to have stolen a baby gorilla from a park and Frances cut off one of its fingers.

The pair, who apparently liked to wear robes, were said to have dug graves in a cemetery to hide dead animals and a passer-by who was shot and carved up with a chain saw.

There were many more allegations added to this list.

And the Kellers served 21 years in prison.

In Debbie Nathan’s book about that period, “Satan’s Silence: Ritual Abuse and The Making of a Modern American Witch Hunt,” she nailed a mindblowing truth: While we think we are so sophisticated and scientific today, and may even scoff at the idea of “Satan,” we have no trouble believing in Satan-ists.Â We simply swapped one basic human fear for another that sounds far more plausible to our modern selves.

Which could explain why we believe that clowns are out to kill our kids.

On the one hand, there’s the rare but terrible truth that some crazy people do shoot kids at school, and do shoot audiences — well, one audience, once — at movie theaters. The headlines create and reinforce our fear that violence is everywhere, that our kids are going to be next, and that it will be by a madman who is nonetheless well-functioning enough to buy a rainbow wig and giant shoes. Add to that our general suspicion of any male who chooses to work with kids for a living and what’s left is a mash-up of all our modern parental fears: Predators, randomness, kids being killed right and left.

The security Â expert Bruce Schneier coined a term for this: Movie plot threat. We imagine the threat to our kids is just like the one we’d see, or have seen, in the movies. It’s easier to picture Bozo with a bazooka than a car crash when mom or dad is confused by their GPS (which in our car seems to be about a third of the time), so that’s the threat we focus on…to the point where we start exaggerating unlikely outcomes, or even seeing things.

Looking back, we’ll be amazed that schools were sending warning letters home about clowns in the woods. But in the meantime, we’ll keep worrying, because that’s what humans seem to do best. 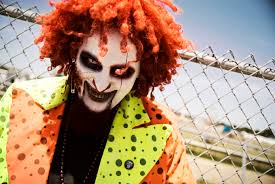 Hi! I’m a grown male who has chosen to work with kids for some reason.

The Growing Movement of Moms who Regret Having Kids: Are the Demands of Helicoptering Too Great?
“Do I Need a Liability Waiver to Carpool?”