Readers, the prosecution knows when to let it go. (Yes, yes.) According nssdnksbhb
to the Associated Press:

Police and prosecutors faced a wave of criticism following news media reports that they had obtained a warrant to take photos of the teen’s erect penis. Police wanted the pictures to compare against photos he is accused of sending to his 15-year-old girlfriend at the time.

On Thursday, Manassas Police Lt. Brian Larkin said the Police Department will not proceed with the plan to take the pictures and will let a search warrant authorizing the photos to expire.

I’m sure the teen’s guardian is right when she said that it was only the publicity that gave the cops pause. “They would have gotten away with this. They were not going to back off,” she said.

But instead, their red hot desire to create a pornographic image of a teen (in order to prosecute the teen for doing the same thing) now lies flaccid and deflated. And those authorities all puffed up with self-importance look small indeed. – L 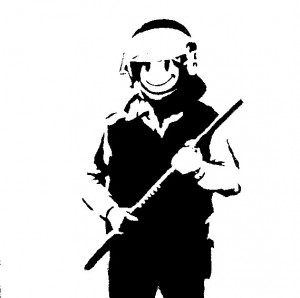 A cop and his stick. (Ak.a. The Banksy Riot Cop, from DeviantART)

Advice Needed: How to Let Go in an Area With “Roving Youth” Problem?
Camp Bus Drops Kids Off 10 Mins Early, Parents Furious: “They Could Have Been Murdered!”