December 7, 2015
.
Here dbeeyzzyzr
is a cry for help — this dad’s and my own. I’m looking for someone to write a post or booklet on “How to Fight CPS” that is not a snarling screed (however cathartic), but filled with relevant laws, websites, and even phone numbers/emails that people can contact for legal help. Let me know if that’s something any of you feel up to producing, for zero monetary recompense. (The same way I write this blog!) — Â L.

Dear Free-Range Kids:
Â .
I’m really at the end of my rope and I was hoping you could help.
.
My family was contacted by Denver Department of Human Services after a mark was found on my 11 year old son’s neck by his teacher. Â My wife explained to the investigator that she had been pulling my son (who has Aspberger’s Syndrome) off of my 9 year old when they were having a fight. Â The investigator called me on a Monday, told me she needed to inspect the home ASAP. Â She visited later that day.
Â .
Now, I’m not going to lie, our home was a mess. Â And the four hours of cleaning I did that day helped, but it was still messy when she saw it. Â She came in, saw the house and left with little comment. Â She called a week later and told us she’d like us clean the house even more and see it again. Â We SIGNIFICANTLY cleaned the house, and she visited again. Â Now, she’s telling us that we haven’t done enough and wants us to clean again and she’ll come see us for a third time.
.
Now, I am angry because after a little research on the Internet, I learned that I didn’t need to let her in at all. Â I’m also angry because I feel like there is no justification for any further visits. Â And after hearing all the horror stories, I’m more than a little concerned. Â I’m also very frustrated because I can’t seem to find any legitimate advice on whether or not to allow a third visit or require a court order. Â Most of the “Fight CPS” info is so radical that I feel like it isn’t legitimate. Â I don’t know whether to get a lawyer or send a letter or what to do.
.
You website has been, by far, the most valuable resource, but I need more information. Do you know of any additional resources that can help me?
Â .
Thank you so much for your time and your energy. — A Vexed Dad

.
Dear Vexed: Here’s the deal. Basically, I believe in CPS when it comes to removing kids from truly dangerous homes. My beef is that “dangerous” is in the eyes of the beholder. Â Since when is “Not clean enough” a true danger to the kid? The kid hadn’t shown up at the doctor’s covered with dirt and festering scabs. He came in with a neck bruise, which shouldn’t have triggered an investigation in the first place, given the fact it was a one-off and explained. But now CPS holds all the cards. THAT is what is so infuriating. How come CPS can harass and undermine an entire family on such a flimsy excuse?Â
.

I don’t want to get too dramatic, but in Scotland, every baby born is now issued a “named person” — a guardian — to watch over how he’s raised, ever on the lookout for problems. It’s as if the child has a third parent. My goal is to make sure moms and dads are allowed to parent as they see fit, in all their imperfection, without the threat of government interference unless a child is indisputably and immediately in obvious and grave danger.

That’s me in a nut shell. (Which is where some people think I belong.) – LÂ 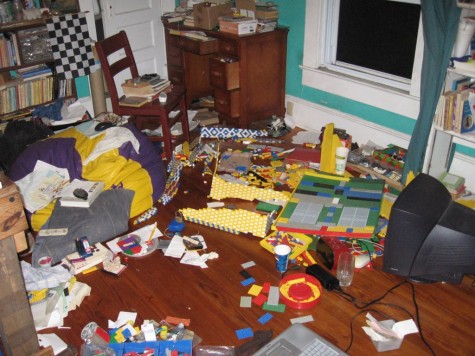 A mess is not a crime! (And this isn’t the letter-writer’s home. It’s a Wikipedia photo.)Â