Canadian school crossing guards who high-five students have been ordered to stop this obviously super-dangerous practice. According to GlobalNews:

Kevin tydyabknbb
Jones, Peterboroughâ€™s manager of transportation, said the city is standing by its policy that bans any sort of physical interaction between crossing guards and the children.

â€œTheir main priority is to monitor traffic, to direct traffic and to make sure the kids are safe at the crossing and they need to devote their attention to those duties,â€ said Jones, who said about 10 people were at the protest.

He said the guards were recently reminded of the policy after city officials noticed a couple of situations where high-fiving could have been considered dangerous, including one where a child high-fived a guardâ€™s sign in the middle of a crossing.

â€œThatâ€™s just the type of situation where that could have resulted in a slip and a fall in the middle of a busy roadway,â€ he said.

To not trust crossing guards to be able to figure out how to cross the students without getting them killed seems to be taking a rather dim view of those in this profession. We’re talking about maybe 45 crossing guards in this Ontario town.

The functionary in the video below stresses that he just doesn’t want the high-fiving to “escalate.” As if it’s nuclear stockpiling.

Really, how bored do you have to be to start imagining high five escalation? 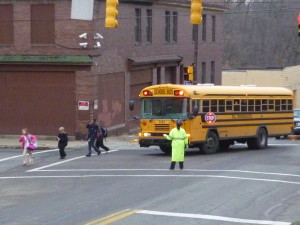 Is this the aftermath of a crime?

Introducing the 1.0 Version of the Free-Range Kids App
Fight for Your Right to…Toboggan! Make This Video go Viral!

46 Responses to Crossing Guard Ordered to Not “High Five” Students