Adrian iszrzihist
Crook, the dad behind the blog 5Kids1Condo, taught his four oldest kids — 7, 8, 9 and 11 — how to ride the city bus to and from school for the past two years in Vancouver.

The result? Fantastic. The kids love it, and became friends with the bus drivers. Once Adrian even received an email from a random bus passenger saying what a pleasure his well-behaved kids were.

BUT (you knew there had to be a BUT) recently someone reported these “unsupervised” kids to the Ministry of Children and Family Development — the Canadian equivalent of Child Protective Services — and the agency opened an inquiry. They came to Adrian’s house and interviewed each child separately. Aware of the stakes, Adrian tried to be cordial. He provided character references. And, addsÂ Adrian:

I even suggested the Ministry shadow the kids on a bus ride, but they declined.

While the Ministry conducted their weeks-long investigation, they had me sign a â€œSafety Planâ€ stating that the kids wouldnâ€™t take the bus alone until the investigation was completed.* I returned to spending several hours a day transiting the kids back and forth from school, a reduction in freedom the kids didnâ€™t understand.

Can you guess? My guess is you can.

It started off in a favourable way, with the supervisor insisting that Iâ€™d gone â€œabove and beyondâ€ what any parent should have to do to train their kids to be responsible and conscious transit riders….

Ultimately, however, the Ministry had checked with their lawyers â€œacross the countryâ€ and the Attorney General, and determined that children under 10 years old could not be unsupervised in or outside the home, for any amount of time. That included not just the bus, but even trips across the street to our corner store, a route I can survey in its entirety from my living room window.

That bizarre and benighted decision was based on a British Columbia case we’ve discussed here, when a judge ruled that no child under 10 can stay home alone. As terrible as that decision was, it didn’t even relate. That was about one 8-year-old, home alone, not four kids together, on the bus.

The Ministry also said that in other provinces, the legal age to be unsupervised is much higher. In fact, only three provinces have legislated minimum ages at which kids can be left home alone (and BC isnâ€™t one of them): Ontario (16), New Brunswick (12) and Manitoba (12). Only Quebec has a statutory minimum age for being left alone in a vehicle, and thatâ€™s 7 years old.

Does anyone really think there are no children under 16 being left unsupervised in Ontario?

Of course not. But does anyone really think common sense is what we’re talking about here? The social workers gave every made-up reason for grounding the kids:

[They] stated that the comparatively wide-ranging freedoms we enjoyed in our childhood were, â€œbefore we knew betterâ€ â€“ despite widely available crime statistics that demonstrate our kids live in a safer world today than the one we grew up in. ….

Anyone who knows me can tell you Iâ€™m a firm believer in evidence-based policy-making, so this fear-driven assertion rung hollow for me.

What’s more, the kids already had been taking the bus for two years — safely! So clearly this investigation “safety” plan was only in reaction to the busybody’s call, for that is all it takes:

Itâ€™s a â€œCover Your Assâ€ culture, where even if a trivial issue is reported the Ministry cannot condone it, lest they be responsible for future issues. The Ministry has no incentive or ability to dismiss a report or allow a situation to continue â€“ regardless of how many steps a parent has taken to ensure the safety and well-being of their children.

Our familyâ€™s freedom of mobility has been dramatically restricted for little reason beyond the complaint of an anonymous person.

The dad is running a GoFundMe page to pay for the legal case he hopes to make against the government. In the meantime, he reminds us all that when the state insists that the only acceptable parenting is helicopter parenting, it is committing a serious crime of its own: Robbery. It “robs our children of agency, independence, and responsibility.”

*The Meitiv family in Maryland had to do the same thing. 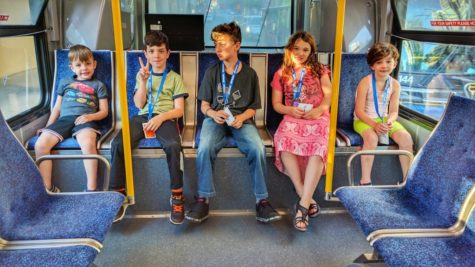 Adrian Cooks kids where they are no longer allowed to be without an adult.

Proposed Florida Law: Leave Kid in the Car for 1 Minute, Go to Jail for 60 Days
The Time Fox TV’s Kennedy Almost Had Her Baby Taken Away by the State

61 Responses to Dad Teaches his Kids to Ride the Bus. Then CPS Tells Him They Can’t Even Go Outside Alone till Age 10