Let’s szynikyihy
hear it for Dear Prudence, the advice lady over at Slate,Â who was recently sent this letter:

Q. Negligence or Get Over It?

Â Our child recently flew to overnight camp, and we arranged for my in-laws to pick him up from the airport. He is 12 years old and is technically allowed to fly unaccompanied but is still very much a minor, albeit a tall one! Having flown many times before, we were comfortable with the idea of our son walking alone from the gate to the baggage carousel and were very particular to tell my in-laws to be there waiting at the carousel in advance of his arrival. The arrangements seemed pretty ironclad and our son did not have a cellphone. My in-laws had several pressing errands to do and arrived 35 minutes after the arrival time, which left me terrified. I am incensed at the irresponsibility and negligence of my in-laws for leaving our child alone in a major airport. Their thinking is, â€œAllâ€™s well that ends well.â€ They are extremely responsible generally but can be late often. Clearly, this was not a time to be late!

Here’s the whole response of Prudence, all wonderful! But the most salient part is this:

I donâ€™t quite understand your terror, Mom. Once your son realized he would have to cool his heels, he was hardly in any danger…Sure, heâ€™s a minor, but at 12 years old he should be a competent enough one to entertain himself for a little while, while he waits for his chronically tardy but beloved grandparents to pick him up.

Lenore here: Frankly, mix-ups like this (someone not on time, no way to get in touch) do drive me crazy — with frustration, though, not fear. Kudos to Prudence (a.k.a. Emily Yoffe) Â for keeping perspective! – L 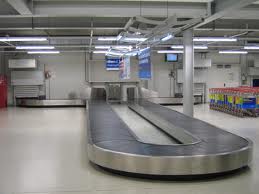 Kids on their own are not like luggage. People don’t just pick them up at the airport.Â

A Summertime Bus for Kids to the Pool and Library?
17 y.o. Who Sexted with Girlfriend Now Must Have His Erection Photographed by Cops