Rachel fafystskkz
Fracassa describes herself as a” long-time reader and Free-Range mom of four,” whose family is always “off creating new adventures.” Their latest project is The NightLight, which rates/recommends products for babies and parents.

WHAT FRIGHTENS MY FAMILY by Rachel Fracassa

Six filthy bare feet run along the gravel drive and hop over a leaf-littered creek to get to the pasture where their father is buried. Itâ€™s just a field, like any other along 7 highway, but under a little Swamp Oak is a rock – a rock with my daughterâ€™s scrawl â€œDADDY.â€ And beneath that, a grave.

We donâ€™t make much of fuss over this spot. The kids whirl about, they snatch the flowers budding atop the weeds and sprinkle the petals on each othersâ€™ heads. Itâ€™s not a sad place, nor is it a place of joy. It just is.

Tyler and I started our family in 2002. We were Free-Rangers from the get go, though we didnâ€™t know it at first. As young parents, we were under constant scrutiny and our methods were often deemed foolhardy. Gwynneth, our first-born, was wild and unflinching. By the age of four, she was climbing over the sides of two-story slides to shimmy down the supporting poles â€œfirefighter style.â€ Up and up she would go, and while we would lean back to give her a smile, other parents in the park would run beneath her and scowl in our direction. â€œThat fall could kill her,â€ friends would say. I knew she was fine, I had watched her do it dozens of times. I had stood beneath her myself when she first began to test her limits. But even though I had faith in her abilities, the reactions of others would cause me to second guess myself. When I stumbled upon Free-Range Kids, I was beyond delighted. I had finally found proof that my antics had a greater purpose, that I wasnâ€™t alone. And I wasnâ€™t crazy. It was the boost in confidence that I needed and we never looked back.

Itâ€™s been 20 months since my husband was killed in a car accident on his way home from work. I know just how quickly oneâ€™s reality can change. I have seen the fragility of life first-hand. That knowledge haunts me as I see the potential for harm in every activity, knowing that I could not carry on if I lost another piece of my heart. I watch my son and daughter take their baby brothers off to the park on their own and my head fills with improbable yet unnerving possibilities.

But hereâ€™s the thing: death isnâ€™t the scariest thing out there. Death has made me more frightened of not living than of dying. And that is what I want to give to my children – the strength and the permission to never hold back, to test their limits, to fail, and to get back up again. Because holding them back, keeping them from their potential on account of my own fear, that is a death, too. – R. F. 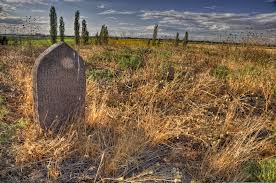 Parents Let Kids Free-Range at Campgrounds. What Can That Teach Us?
Toddler Literacy?

18 Responses to Death and the Free-Ranger