An Arizona mom of four accidentally left her baby in his carseat in her shopping cart after she left the supermarket. The tot was spotted almost immediately by an off-duty cop and taken next door to a Supercuts where he remained, watched over by the locals, for 40 mins — which is the time it took for the mom, Cherish Peterson, to get home, realize her mistake, and rush back.

The KPHO/KTVK ihnbyrfyzy
correspondent reports that, “Fortunately, the baby boy is uninjured and doing fine.”

Fortunately? Like, “Phew! Somehow the boy wasn’t mangled”? The kid was in a carseat in a stationary cart! Â What’s the “fortunately” doing there?

It’s creating danger where there was none.

It’s the way the media and much of America automatically respond any time a child is unsupervised. The underlying assumption is that any moment spent outside a parent’s purview is a moment that the child could quite likely suffer grievous harm. Â It’s the reason a panel of three judges convicted a New Jersey mom of “child abuse” for letting her toddler wait in the car for 5-10 minutes on a temperate day. Those judges said a “parade of horribles” could have rained down on her child — kidnapping, freezing, boiling, everything but locusts — so she was guilty for not acting to prevent all that danger.

All that exceedingly unlikely danger that the judges dreamed up.

Now look at the story in today’s Boston Globe magazine, “When Did Parents Get Â are Parents So Scared?” The author interviews me talking about our child-danger obsessed culture, but ends by quoting John Walsh, the man whose son Adam was abducted and murdered more than 30 years ago. This is a common practice when reporters interview me: the “other side” they pair me with is a grief-stricken parent, making it seem as if we represent equal likely outcomes: A child growing up safe and sound, or being raped and murdered by a stranger.

The Globe piece ends with Walsh saying, “Children are a gift, and there are people who hunt them.” Like deer season. He then tells the writer to Â prepare her kids for that possibility.Â “Give them the tools to make them safe, and maybe youâ€™ll be one of those lucky ones.â€

In other words: Maybe, just maybe,Â there’s an off-chance your child will live.

That’s the reason this story of the child in the shopping cart commanded over three minutes of airtime on the news. In any other era it might have been, if anything, a feel-good story of a ditzy mom helped by a kindly bystander, or one of those funniest home video moments. Instead, the mom is weeping on camera and confessing her sins as if she’s facing the electric chair.

The police are pressing child endangerment charges. But I’m hopeful that if this case ends up in court, the mom’s lawyer will refer to the NJ Supreme Court decision — 7 to 0 — just two weeks ago, that declared: Being an imperfect parent or having an imperfect day does not make a parent a criminal.

Leaving her kid in the cart is not something this mom did intentionally and she has no intention of doing it again. A screw-up isn’t unheard of.Â It isn’t abuse. It isn’t something to be judged. It isn’t news. And it most certainly isn’t a crime.

Maybe, just maybe, the court will understand this. 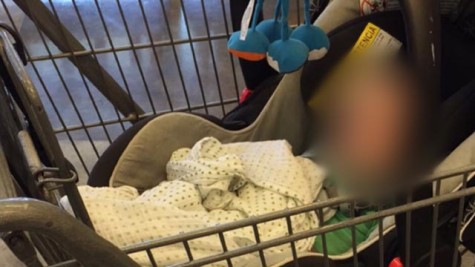 Let the parent who has never spaced out and done something dumb cast the first stone. Â (KPHO/KTVK TV).

A Missing Kid and the Benefit of the Doubt
An Open Letter to Chuck E. Cheese