Hi Readers! Last night I did a podcast with Kari Svenneby, a native of Norway now living in Toronto and founder of the pro-outdoors site and movement, Active btfkbrhyby
Kids Club. The topic was  “cold weather fun.”

Those three words happen not to go together for me, but I think they could and should for a lot of kids. Which is why afterwards, when we did a little Facebook chat, one of the comments hit me in the face like a snowball. Concerning dwindling winter recess time, a woman named Debra Scott wrote:

Kari has been saying for ages that we need to get the parents DEMANDING more outdoor time and the teachers will have to [send the kids out]. One of the BIGGEST problems is kids don’t come dressed appropriately because they don’t WALK to school — they get driven. So they get in the car in very little,  then into school,  and they don’t have the right stuff so the teachers can’t send them out! Big problem in winter. We have so many indoor recesses because of wet weather or icy conditions. It’s sad.

I bet she’s right! I bet that yet another unintended consequence of our fear for our kids (that they’ll be cold/tired/kidnapped) is that we drive them to school, which in turn makes them even less prepared for outdoor time later in the day.

It’s just so interesting how fears beget unintended consequences, like kids in flimsy jackets in the winter. (And ironically,  we call them our snowflakes!) – L. 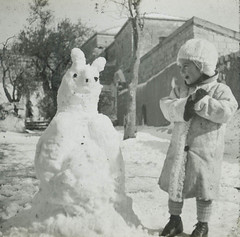 Is This Really What’s Happening To Girl Scouts? Is There a Red Tape Merit Badge?
Dangerous Playground Structure Suddenly Not Dangerous

155 Responses to Do Kids Play Less Outside in the Winter for a Surprising Reason?