Here’s a ieffzaeszn
Yahoo Parenting piece by Beth Greenfield about kids not sledding along anymore. She was inspired by columnist Tom Purcell in TownHall.com, who wrote, “I drove by a popular sledding spot after it snowed last week. I only saw a handful of younger kids and every one of them had at least one adult keeping a watchful eye over him. “

Beth interviewed me about this, and what struck me was that perhaps there’s a link between “sledding alone,” which kids don’t do, and “Bowling Alone,” which adults do do. In his book by that name, Harvard public policy professor Robert Putnam chronicles the decline of community activities.

I realize correlation is not causation, but is it possible that we are spending so much time shuttling and supervising our offspring, we have little left over for anything else, be it bowling or bridge or Kiwanis?

If so, it’s not just the children losing out. Anyway, here’s a bit of what Beth (and I) have to say:

….[This is] the new norm: hyper-supervised sledding, with anxious parents hovering at the top and bottom of hills, if not squeezing between kids right onto the plastic toboggans themselves.

So how did we get here?

It could be the flurry of worrisome media reports and studies that tend to get unleashed around this time of year — the ones with the chilling statistics about cuts, fractures, and brain injuries, and more than 200,000 children treated in emergency rooms for such sledding-related issues each year (according to the latest study, which is from 2010). Many doctors now urge parents to strap helmets on their kids’ heads before letting them hop into their snow saucers or snow tubes — or even to avoid those swirling discs altogether. Turns out sledding is dangerous, and that, of course, is scary.

But Lenore Skenazy — “Free-Range Kids” author, blogger, and star of the reality show World’s Worst Mom — points out, “That was not untrue [when we were kids], and it’s not untrue now.” Skenazy tells Yahoo Parenting that while she does believe in safety, moms and dads will drive themselves crazy — not to mention their kids — if they view every activity as high-risk.

“I don’t know statistics about sledding, but it’s been around as long as there has been snow,” she says. “We are the first generation to believe that, by simply watching, we can magically protect our kids from the laws of physics.”

Anyway, let me know what the sledding situation is in your neck of the woods.

Over by me, we have teens, and they are busy trying to earn shoveling bucks — a bit of gumption explicitly legalized in New Jersey at least:

Legislation sponsored by Senator Mike Doherty (R-23) ensuring that kids have the right to offer snow shoveling services before storms without municipal approval was signed into law by Governor Chris Christie.

Maybe once entrepreneurial kids meet their neighbors, we can start knitting our communities back together. – L 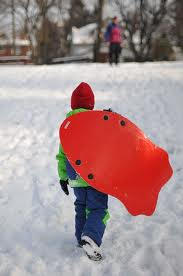 What Age Do Free-Rangers Think a 6-Year-Old Can Stay Home Alone for 20 Minutes?
“Officer, Some Noisy Kids are Playing Basketball in the Street!”

48 Responses to Do Your Kids Sled Without You? Or Shovel?