Hi Readers! There’s the boogey man and then there’s the ice cream man. But thanks to a country suffused with predator panic, the two are fused together like the twin sticks of a  Popsicle.

It’s the same if you are guy and you want to work in day care, or as a birthday party clown, or even as a Cub Scout leader: everyone gives you the extra once over. God forbid an adult male likes being around kids! In our society, we’ve been conditioned into distrusting that. Hence, this zinsynheek
latest proposal:

“I don’t think it’s an invasion of privacy to make sure the ice cream man isn’t a person who would harm our children,” Cooper said.

His proposal — or at least the ice cream part of it —  is based on two entirely false premises:

1 – The idea that ice cream guys are creepy pedophiles until “proven” otherwise.

Only to reinforce our fear of men around kids, period.

“This ordinance is based on paranoia, not on safety, and certainly not on common sense,” says Ben Miller, policy analyst at the think tank I’m working with, Common Good. “The real menace isn’t the ice cream man—it’s the bureaucratic license requirement making it harder for entrepreneurs to create jobs in a struggling community.” 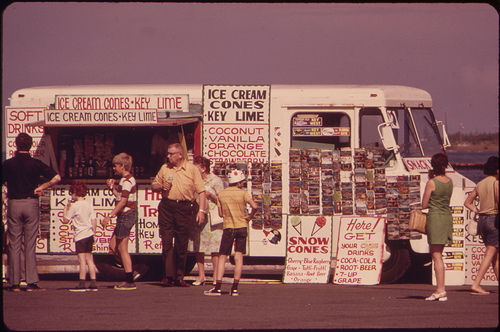 6-y.o. Who Walked Alone to Post Office May be Removed from Her Home
Watch as a School becomes a Prison!