Apparently, some schools think the random running is dangerous or provokes teasing, hurt feelings and other self-esteem crushers.

I thought this sounded silly and overboard. Who among us didn’t grow up running, chasing and tagging one another? And besides, childhood obesity is serious issue that has been in the news for more than a decade, even soaring to the top of First Lady Michelle Obama’s priorities. How can you tell kids it’s important to be active and then forbid them from running around?…

Perturbed about the anti-taggers, I Googled the issue and discovered that banning chase and tag started in 2006 and, slowly, somewhat quietly, is gaining momentum. One mom in D.C. said, “My kindergartner had to write a note home yesterday to apologize for playing tag at recess…the school has banned tag because some kid got scratched this year” (via DC Urban Moms and Dads).

So, readers, is this happening where you live, too? Are you fighting back? How? Please share. The idea of banning tag actually relates directly to the post under this one, about a school district eavesdropping on all its’ students social media posts, in order to make sure no one gets hurt one way or another.

Somehow, we no longer believe that our kids can do anything safely. Not express themselves on new media, not chase each other in an age-old game. But sitting on the couch (with a parent or guardian nearby), still seems acceptable. 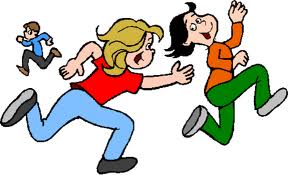 Gosh does this look dangerous!

56 Responses to Does Your School Ban Tag, Too?