1 – That their child will be kidnapped and killed by a stranger, or

Conveniently, both fears are solved the same way: Constant adult supervision and involvement. To protect from predators, parents and institutions hover. But to protect from under-achievement, kids are channeled into early academic training. Even in pre-k they are told to sit down and study. As if they learn nothing of consequence — nothing that will get them AHEAD — by simply playing house, or ball, or let’s all be kitty cats.

The problems with this narrow (even perverse) view of how kids learn is documented fantastically by Peter Gray in his book, “Free arzsazseta
to Learn,” as well as in this fascinating blog postÂ (among many others!). And today in the Washington Post another critic, Angela Hanscom, the Â pediatric occupational therapist who founded TimberNook, and whose work you’ve read here before, discusses The Decline of Play in Pre-Schoolers and the Rise of Sensory Issues.

She writes of giving her own pre-schooler endlessÂ academicÂ instruction because:

Like many other American parents, I had an obsession: academic success for my child. Only, I was going about it completely wrong. Yes, my daughter would later go on to test above average with her academic skills, but she was missing important life skills. Skills that should have been in place and nurtured during the preschool years. My wake-up call was when the preschool teacher came up to me and said, â€œYour daughter is doing well academically. In fact, Iâ€™d say she exceeds expectations in these areas. But she is having trouble with basic social skills like sharing and taking turns.â€ Not only that, but my daughter was also having trouble controlling her emotions, developed anxiety and sensory issues, and had trouble simply playing by herself!

Little did I know at the time, but my daughter was far from being the only oneÂ struggling with social and sensory issues at such a young age. This was becoming a growing epidemic. A few years ago, I interviewed a highly respected director of a progressive preschool. She had been teaching preschoolers for about 40 years and had seen major changes in the social and physical development of children in the past few generations.

â€œKids are just different,â€ she started to say. When I asked her to clarify, she said, â€œThey are more easily frustrated â€“ often crying at the drop of a hat.â€ She had also observed that children were frequently falling out of their seats â€œat least three times a day,â€ less attentive, and running into each other and even the walls. â€œIt is so strange. You never saw these issues in the past.â€

The solution? Fewer desks, more play. And that is a solution based on TRUST. Trusting that this generation of kids does not require more academic rigor at a younger age than any previous generation. Trusting that the lessons Mother Nature embedded in free play will be learned by our kids too. And trusting that even if a child does not learn her letters and numbers by age 5 or 4 or 3, all bets are not off.

Hanscom adds that the way we are addressing the social and physical issues cropping up is just more proof that we think every childhood issue is solved by more top-down instruction. I’m not sure how widespread the practice of teaching Â students special breathing techniques is. I truly have no idea. But I do agree that:

If children were given ample opportunities to play outdoors every day with peers, there would be no need for specialized exercises or meditation techniques for the youngest of our society. They would simply develop these skills through play. Thatâ€™s it. Something that doesnâ€™t need to cost a lot of money or require much thought. Children just need the time, the space, and the permission to be kids.

It takes a leap to believe in our kids and not in Baby Einstein, “academic superstar” pre-schools, and apps designed to make us think our children need them to succeed. 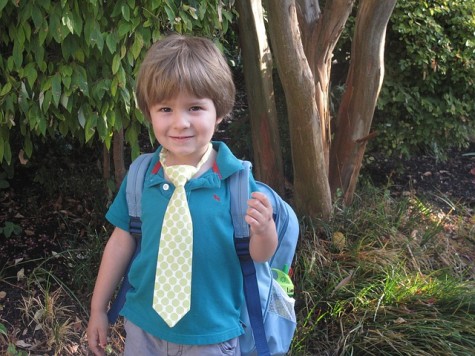 I can’t wait to get to the office…er…preschool!

Police Report: A Boy Got Into White Van. You Know What THAT Means!
New Crime: Asking for Directions While Male

74 Responses to Early Academic Training Does Pre-Schoolers No Favors