When I spoke at the Velo-City innherftyy
Conference in Austria a few years back, the speaker before me declared that Â helmet laws are so cumbersome and they make biking seem so scary that instead of keeping kids safe, they’re simply keeping kids from biking.

Well that shocked me. I’ve always loved helmets and insisted upon them for my kids…who, come to think of it, are not avid bikers.

Now along comes this brilliant piece byÂ Sue Knaup,Â Executive Director ofÂ One Street, an international bicycle advocacy organization. Like the Velo-City speaker, she, too has found that “overzealous bike helmet promotions are undermining efforts to increase bicycling.”

As with all of us at Free-Range Kids, she is not anti-safety. She’s just examining another place our quest for perfect safety is taking us. This piece ran on The Bike Helmet Blog. Â (There sure are blogs for everything.) Love to hear your thoughts! Â (Boldface, mine.) – L.

Are Helmet Programs Scaring Kids Away from Bicycling?

When I was in elementary (primary) school in the 1970s, my friends and I rode our bikes as naturally as we walked. We might walk to the house next door, but a journey of any farther distance was obviously done by bike â€“ duh, no discussion. Also no helmet. And no finger wagging at â€œimproperâ€ riding methods.

The only bike safety course I recall was in fifth grade when the teachers cleared our paved playground to show us braking distances. A car was brought in and set at one end of the playground. At the wave of one flag, the car took off. At the wave of another, the driver slammed on the brakes. Tires squealed and blue smoke billowed. The distance was marked between the flag wave and where the car stopped. Then we each got our chance on our bikes and the braking distances were compared. The whole exercise took about half an hour, but it stuck with us because it was cool and involved us in the discovery of the message. From then on, we gave cars a lot more room.

We never went through bike rodeos or learned hand signals or got lectured about our heads splattering like dropped melons. How did we survive? Quite happily, thanks. And with those happy memories of riding as children we became proud adult cyclists.

As I found myself involved in bicycle advocacy, bicycle safety programs gave me pause. I get twitchy anyway around the term â€œsafety.â€ To set something out as â€œsafeâ€ is simply a lie. We all know that it is an impossible aim. And yet bike safety programs propagate along with their escalating assertions that if cyclists do this or that they will be safe.

I understand that certain riding behaviors will increase the likelihood of a cyclist reaching their destination unharmed. But these behaviors are easily taught through exercises like the one I enjoyed on that playground. We werenâ€™t frightened about any potential outcomes, only shown a bit of physics so we could change our riding behavior to accommodate them. The same could be done to show riders why riding with traffic is a better choice than riding against it.

Yet todayâ€™s bicycle safety programs go far beyond physics and most land squarely on an irrational assertion â€“ thatÂ allÂ cyclistsÂ mustÂ wear a helmetÂ allÂ the time in order to be â€œsafe.â€ Not only is this a lie, it does nothing to teach cyclists better riding behaviors so they can avoid a crash.

Taking this message to our schools is a dramatic change from my experience as a child. I wonder how my friends and I would have responded if we had spent that half hour watching our teachers drop melons and eggs as if they were our heads as we rode our bikes. I hope we would have been independent thinkers enough to call bullshit and just continue to ride. But we sure wouldnâ€™t have learned about braking distance and the whole thing would have been a negative, miserable, and scary experience.

Never mind that bicycling is one of the least likely ways to suffer brain injury. Find a few charts that show this clearly onÂ One Streetâ€™s Bicycle Helmet page. Iâ€™ve never seen a melon drop video made for children who ride in cars, but that would be the more logical reason for searing this horrifying image into childrenâ€™s memories.

Never mind that frightening children into wearing bike helmets does nothing to show them how to avoid a crash.

And never mind that bike helmets are only designed to withstand crashes up to the speed reached by falling over from a standstill. They do little if anything to prevent brain injury in most crashes. See my previous post â€œMy Bike Helmet Saved My Life!â€ for more details on this misconception.

More importantly, I am concerned that bicycle safety programs are scaring our kids away from bicycling. If children arenâ€™t riding, we are losing our next generation of adult cyclists. The evidence is frightening in itself:

Kids who buck the trend, perhaps because they are independent enough thinkers to call bullshit on these scare tactics, are losing theÂ Safety in NumbersÂ protection we enjoyed as kids. We rode in packs, which made us very visible. But my pack was just one of many packs of bike-riding kids in my town and others around the world. Drivers expected to see kids out on bikes and drove accordingly. Now to see even one kid riding a bike is a surprise.

This mess bothers me to no end. I can hear all the bike safety schoolmarms justifying their strict doctrine with their belief that if just one life is saved the reduction in bike riding by kids is worth it. Bullshit. No one can claim they saved a life with a frightening safety message. The life, rather the person in charge of that life, needs a whole package of knowledge in order to make the decisions that will keep them from harm. With that full package, including the knowledge of how safe riding a bike actually is and how little protection a bike helmet offers, the decision to wear a bike helmet will be the last on their list for crash avoidance tactics.

Even as I wallowed in the sorrowful heap of fearmongering materials to write this post, I was cheered by one hopeful discovery from, of all places, Detroit. Awhile back some fearmongers had passed a slate of ordinances criminalizing any kid in Detroit who dared pedal a bike in the streets. As I waded through the muck left by similar fearmongers all over the world, I came upon the uplifting news thatÂ Detroit has repealed all their restrictions on youth cycling. While it was a sad occurrence to begin with, this repeal may be a sign that people of all ages are finally calling bullshit on scare tactics that do nothing but frighten away our next generation of cyclists. Thanks Detroit!

Are you fed up with fearful tactics that could be scaring kids away from bicycling? Do you have childhood memories that cause you to question their claims? If so, please offer them in the comments section. A solution may take many small steps like the one in Detroit, but the more people who stand up against these scare tactics, the more small steps will be taken until kids can finally ride free again. –Â Sue 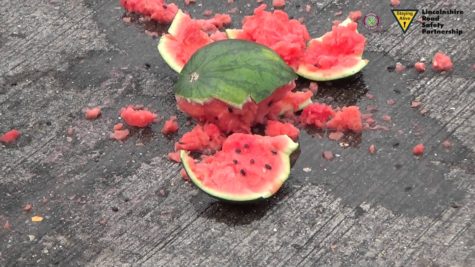 UPDATE! School Explains “Real” Reason for Its Clapping Ban
What is the Most Common Age of a Sex Offender? (Surprise!)

93 Responses to Enough with the Smashed Watermelons! Helmet Mania Is Scaring Kids Away from Biking