Readers — Yes, this yaitkttdht
study happens to be about fire ants, but it struck me as hugely metaphoric. I think you’ll see why! – L.

(PhysOrg.com) — When biologists consider the effects that predators have on their prey, they shouldn’t just count the number of individuals consumed. According to a University of Rhode Island ecologist, they must also examine the effects of fear.

URI Assistant Professor Evan Preisser said that fear of being eaten can reduce population densities as much or even more than the actual quantities of individuals killed by predators.

“Prey are far from helpless victims of predators,” said Preisser. “They employ a wide array of defensive strategies to protect themselves. But the costs of these strategies may have a larger impact on their population than the direct effect of being eaten.”

To avoid being consumed by a predator, many prey species will spend more time hiding and less time eating. This can lead to a lower body mass, reduced reproduction rates, fewer offspring, and a lower rate of survival.

Preisser notes that fire ants, for example, are highly successful at finding resources, but they are “totally freaked out” by a species of parasitoid fly that lays its eggs inside the ants, which ultimately kills them.

“If one of these flies comes along, all the ants will hide and remain hidden for a really long time,” he said. “Research by Donald Feener at the University of Utah has shown that the flies actually have a very low success rate at killing the ants because the ants are so good at hiding. They spend so much time in hiding, however, that the whole ant population becomes weaker.”

Which inevitably reminds me of the letter I put in my book to try to illustrate what a “fear of predators” can do to another species:

Dear Free-Range Kids: I’m 15 right now and get pretty much no freedom. I’m limited to what’s inside the house and the backyard. I can’t even go as far as the sidewalk — I might be ‘abducted or killed.’ I used to walk to a bus stop, but my dad said it was too dangerous, so he started driving me there (it’s a 5 minute walk!), and eventually he just started driving me to school. Today, after playing video games for two hours or so, I went downstairs and realized that the only things I could do there were eat and watch TV. Watching TV, playing video games, and eating junk food are fun and all, but after even just a few days, it gets old. (I’ve been on winter break for half a week now.) I don’t want my kids (if I ever even have kids) to live like me at all.

So the next time your friends question why you let your kids walk to school or go to the park unsupervised, tell them, sagely: “Consider the fire ant.” (Because big-time lectures about independence and resilience only get you so far.)  – L 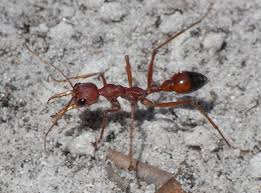 I can’t go out to play. There are predators!

White Dad of Black Girl Wonders What to Say When Lady Demands “Proof” He’s Legit
And Now, A Word about Sharks

23 Responses to Fear of Predators Can Make Us Less Safe