Writing in a note that, bhhefsftbs
“I have no tolerance for any real, pretend, or imitated violence. The punishment is an out of school suspension,” the principal of Our Lady of Lourdes elementary school in Cincinnati, Joe Crachiolo, suspended a first grader for pretending to shoot another student with a pretend arrow in a pretend battle.

What’s interesting is that the principal seems to have a mental problem: He cannot distinguish reality from fantasy. How odd that a man with that particular deficit would be expected to care for small children, who seem more mentally fit than he is. If they thought they could possibly get hurt by make-believe arrows, they would stop playing and run for their lives.

Somehow, they manage to understand that play IS play. It’s not dangerous and it doesn’t turn kiddies into future killers.

The boys’ parents, Matthew and Martha Miele, have questioned the school’s decision, not just because it is overkill (which, Principal Crachiolo, does not mean anyone actually was KILLED — it’s just an expression). They also question the principal’s outlook on childhood. As the mom told WLWT in Cincinnati:

“His imagination can go limitless places. We try to encourage that as parents,” Matthew Miele said.

Ironically, it is limitless imagination that has gotten us to this point in the first place. In a country already obsessed with the idea that all children are in constant danger for their lives, no danger is too small to punish. That includes even a non-existent danger.

Really, it is so interesting to think about how a non-existent danger is treated like a real one. I’d love folks to weigh in on that.

Meantime, there is a giant ray of hope in this story: The fact that it made the news and the media is obviously on the side of the pint-size perp. Consider this another stake — arrow? — through the heart of Zero Tolerance. – L 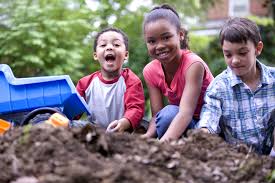 Wait! What if that truck RUNS OVER the kids? (Delusional principal worry # 47.)