Let’s rfkryksshn
help this lady! What CAN and CAN’T strangers do when they see a kid anymore?

I am a flummoxed grandmother, age 67, from a rural community in the Midwest.  What I see with kids today shocks and startles me.  I don’t know when to say hi to a child for fear of getting a lecture from a parent about their child not knowing me (I’m a stranger), to even looking at a child when I walk in the park.  When I travel by air and a child is being unruly by my side, I don’t know whether to say something or not.  I’m exhausted when I hear a parent explaining in immaculate detail something relatively simple in the everyday world, so that the child won’t have their self esteem hurt.  I feel like I need to go live in a different world.

I love children and respect parents, but what’s happening? Can you please address what to do and not to do with children under the age of 22 anymore?  I truly have all good intentions, but it seems others are looking for something “wrong” in whatever I do.  Any advice would be appreciated.  Help.  And thank you for what you do.

I don’t believe that all parents are high-strung like this, but I do understand the real confusion now on whether kids are part of the world or private property. And are we just kidding ourselves when we think back and believe it was easier to interact in “the olden days”? – L 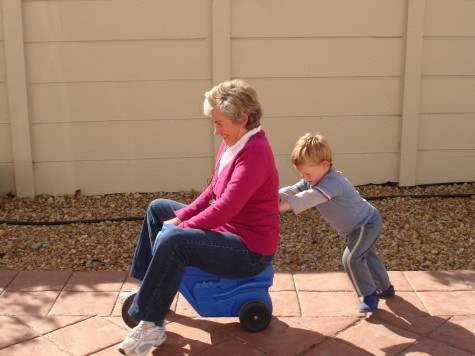 What’s pushy and wha’s allowed  when you’re a grandma talking to strangers’ kids?

A Surprising (Or Maybe Not) Stranger Danger Experiment
Are Our Kids Too Safe to Succeed?