Readers sazreezhri
— Here’s a note about a show I had not heard of. This post comes to us from David Kleeman a “playvangelist” at theÂ PlayCollective, a research and strategy company in New York. For 25 years, he ran the American Center for Children and Media.

Finally, North America has a TV series for Free-Range Kids kids. If you have Amazon Prime, run (carefullyâ€¦and not with scissors!) to check out Â Annedroids. In Canada, it will air on TVOKids.

Tween inventor and scientist Anne lives in a junkyard and fashions â€œdroidsâ€ from bits and scraps. In the debut episode, she meets two neighbors â€“ gamer Nick and irrepressible Shania. They become her collaborators in building and using droids and robots to carry out experiments.

Thereâ€™s a social/emotional angle, as well. While Anne teaches science to Nick and Shania, they introduce the reclusive Anne to (as one of the young stars put it in an interview) â€œthe science of friendship.â€

Thatâ€™s a triple threat: First, that a TV show lets kids explore unsupervised, use real tools, and figure things out for themselves. Second, that it shows cognitive and social-emotional engagement as inseparable. And third, that it Â destroys the tired dictum that boys wonâ€™t watch girl-led (smart girlÂ led) series.

I believe one reason we struggle to have Free-Range kids in the U.S. is because we lack models in popular culture. Kids’ television channels (not just in the US) have standards-and-practices executives who vet episodes for dangers, especially if these might be replicable. So shows depicting adventurous, unsupervised kids making and doing things are rare.

Those standards vary widely across cultures, though. We can debate why: whether supervision is different in other places, or parents have differentÂ goals for their children, or other reasons. Still, as Iâ€™ve traveled the world seeking innovative and outstanding childrenâ€™s media (for over 25 years!), Iâ€™ve been drawn to programs that put kids at the center, letting them do things for themselves.

Thereâ€™s no mistaking the determination seen in a childÂ building somethingÂ of her own design, the real learning embedded inÂ taking something apart, or the pride of a child whoâ€™s been taughtÂ to do somethingÂ dangerous but productive.

Let’s just hope that after the kids watch Annedroids they take to the streets — or garages. 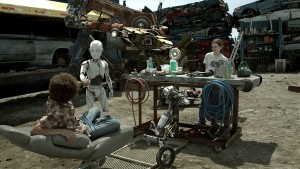 How to Respond to a Well-Meaning, Misguided “Never Leave Your Kids in the Car” Campaign?
Mom Invents App to Disable Kids’ Phones if They Don’t Answer When She Calls