Dan hsdarfyhky
Shuchman, chairman of FIRE (Foundation for Individual Rights in Education), the group that fights for free speech on campus, has written this Wall Street Journal review of a book by one of my favorite thinkers, Frank Furedi. Furedi wrote “Paranoid Parenting” back in 2002, which was the first book I read about this new phenomenon of “helicoptering.”

Now he is at the vanguard again, and I think there’s a direct link from that book to this one. “What’s Happened to the University?” is about hypersensitivity on campus and the idea that if you do or say anything that anyone else interprets as hurtful, no matter how unintentional or mild, you have done something painfully wrong and must be punished.

All students are assumed to be fragile, which seems to Furedi, and Shuchman, and me, like a continuation of a childhood so insultingly sheltered that kids aren’t even allowed to get a raindrop on them at pick-up. (See yesterday’s post.)

Rancorous trends such as microaggressions, safe spaces, trigger warnings and intellectual intolerance have taken hold at universities with breathtaking speed. Last yearâ€™s controversy over Halloween costumes at Yale led to the departure of two respected faculty members, and this year made the fall festival a flashpoint of conflict at campuses across the country. The recent explosion in the number of university administrators, coupled with an environment of perpetual suspicionâ€”the University of Florida urges students to report on one another to its â€œBias Education and Response Teamâ€â€”drives students who need to resolve normal tensions in human interaction to instead seek intervention by mediators, diversity officers, student life deans or lawyers.

AsÂ Frank FurediÂ compellingly argues in this deeply perceptive and important book, these phenomena are not just harmless fads acted out by a few petulant students and their indulgent professors in an academic cocoon. Rather, they are both a symptom and a cause of malaise and strife in society at large. At stake is whether freedom of thought will long survive and whether individuals will have the temperament to resolve everyday social and workplace conflicts without bureaucratic intervention or litigation.

Mr. Furedi, an emeritus professor at Englandâ€™s University of Kent, argues that the ethos prevailing at many universities on both sides of the Atlantic is the culmination of an infantilizing paternalism that has defined education and child-rearing in recent decades. It is a pedagogy that from the earliest ages values, above all else, self-esteem, maximum risk avoidance and continuous emotional validation and affirmation. (Check your childâ€™s trophy case.) Helicopter parents and teachers act as though â€œfragility and vulnerability are the defining characteristics of personhood.â€

Once again, it’s not the parents or even teachers I blame. They are all swimming in this same soup that insists kids can’t handle anything. Not a walk around the neighborhood on Halloween. Not a half hour at the library alone. Â Not a sleepover. Not evenÂ some free time at the local park. How does that theme of danger everywhere and hence the need for constant protection/oversight play out as the kids get older?

The new demands for â€œbalancingâ€ free speech with sensitivity and respect have several unifying themes, according to Mr. Furedi. One is that they are based on the subjective sensitivities of anyone who claims to be offended. If words can cause trauma and are almost akin to violence, an appeal to health and safety guarantees that â€œthe work of the language police can never cease.â€ Microaggressions, by definition, are committed unconsciously and without intent. Since â€œit is almost impossible to refute an allegation of microaggression,â€ the author views them as the ultimate â€œweaponisationâ€ of offense-taking. Emory University students, for instance, demanded redress for their â€œgenuine concern and painâ€ after seeing the name of a major presidential candidate written in chalk on campus, an incident proving â€œthat in a world where anything can be triggering, people will be triggered by anything.â€

There is a â€œbeguilingâ€ appeal to well-intentioned calls for civility and respect, Mr. Furedi says. After all, â€œsensitivity is an attractive human feature and essential for minimising conflict.â€ He cites the Chancellor of the University of California at Berkeleyâ€™s seemingly benign exhortation that â€œwe can only exercise our right to free speech insofar as we feel safe and respected.â€ Yet Mr. Furedi convincingly demonstrates that, by ranking liberty on par with or subordinate to other values, â€œthe deification of the commandment â€˜Do Not Offendâ€™â€ transforms fundamental liberties into liberties â€œcontingent on other peopleâ€™s sensibility.â€ Freedom becomes a â€œnegotiable commodityâ€ that inexorably will be bargained away.

Ironically, Mr. Furedi observes, for a movement that claims to be driven by concern for individual empowerment, respect and autonomy, the new campus values actually represent an astonishingly pessimistic and condescending view of the ability of human beings to deal with the basic challenges of life. They are premised on the â€œsupposition that people lack the intellectual or moral independence to evaluate critically the views to which they are exposed.â€ As a practical matter, the notion that human dignity mandates protection from the pain of â€œhurtfulâ€ speech is â€œpossibly the most counterproductiveâ€ rationale for constraining freedom; â€œpeople acquire dignityâ€ by learning to deal with â€œthe problems that confront them,â€ not by relying on the â€œgoodwillâ€ of an administrative elite.

Throughout history, the impulse to censorship has been driven by political or religious zealotry. In the 21st century, Mr. Furedi posits, speech suppression has assumed the mantle of mental-health therapy. But policing actual speech and books is not sufficient. In todayâ€™s environment, no matter what you say, it is exclusively the â€œindividual who is hurt or offended . . . who decides what you really meant.â€ Thus peopleâ€™s inner lives and imputed motivations, even unconscious ones, have become â€œlegitimate terrain for interventionâ€ by authorities. In an unprecedented twist, students themselves are agitating for the imposition of campus thought control. 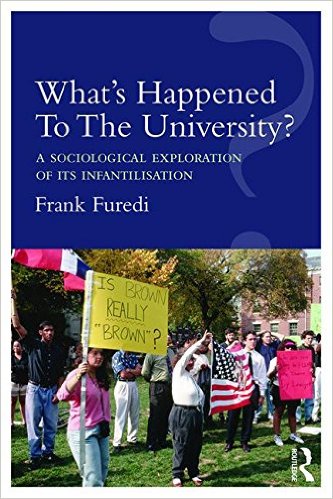 From coddled childhood to campus kookiness.

Dear Parents: It is Raining! We Are Doing our Utmost to Prevent Your Child From Getting Wet at Pick-Up
“When We’re Outside the Classroom, We Get to See the OTHER Things Kids are Good At”

42 Responses to From Trophy Culture to Campus Microaggressions