A truly horrible event occurred in Sheboygan, WI, the other night: Parents were out at what is said to have been bible study while their four kids — 11, 10, 9 and 7 — were home. A bykbrttehe
fire broke out. The Sheboygan Press reports that one child escaped. The oldest, Natalie, went back in to get the younger ones and she died, as did her 7 year old brother. Their 10 year old brother is in critical condition:.

â€œVery preliminary information is that theÂ 11-year-old was able to wake the 9-year-old and give a warning to flee the residence. The 9-year-old did, believing the others were following,â€ [Sheboygan FallsÂ Public Safety Director Steven] Riffel said. â€œThe 11-year-old returned to assist the other two still upstairs, but none were able to flee the home.â€

The family has a gofundme account set up — here it is — and is enduring not just this unfathomable grief, but commenters who say it’s all the parents’ fault for not being home. But here’s a comment — one of many — that is eloquent and compassionate. It was sent in by a person namedÂ Jessica Robinson:

I have never before commented on Gofundme or really any internet tragedy, but as the eldest of five kids, I will say that I was also left to babysit my siblings while our mother ran errands, starting at age 10 or 11. She was never gone long, usually to the post office or grocery store, akin to how these parents must have felt when following their weekly routine of Bible Study and leaving the eldest in charge. It never felt like “bad parenting” because it was not. These parents are absolutely not at fault, and the people leaving those heartless comments are cruel. It is likely that none of you commenting knew Natalie. Perhaps her parents felt she was responsible and mature enough for her age to be in charge as her younger siblings slept while they stepped out for an hour or so. Accidents and freakish, tragic events such as this unfortunately occur everyday without rhyme or reason. If anything, the small silver lining is that one or both parents did not also perish in the fire, and that the surviving daughter still has parents to raise her and they will try to get through this as a family. It is beyond my comprehension as to how some people could speak hatefully in the face of such a tragedy that has left one family forever hurting. Have you no heart? My thoughts go are with this family. I hope they are one day able to find a new “normal”; though the pain of such untimely losses will never fully go away, I pray that the parents and daughter will still be able to see and experience the beauty in life and rebuild from this unimaginable occurrence. Rest in paradise, little angels. Natalie is a true hero. â™¥

It is exactly situations like this that our legislators will use to justify things like the “No Children Under 10 Shall Be Allowed to Stay At Home Alone” law proposed last week in Rhode Island. And yet, laws made in the aftermath of tragedies are generally terrible. They look back and say, “If only we NEVER let X do Y…” without taking into account any of the unintended consequences, hidden costs, or basic freedoms lost.
Â .
Let’s not blame the parents and let’s not make any new laws based on an event so rare and horrifying, it made the newspapers and has already garnered many contributions. – L.

UPDATE: NO CHARGES WILL BE FILED AGAINST THE PARENTS:

Sheboygan County District Attorney Joe DeCecco said the fire may have been electrical. And he said it would take a “major revelation” to cause him to file any criminal charges against the parents, Chris and Kristi Maki.

“I’m inclined right now to say it’s simply a tragedy, not anything else,” the prosecutor said. 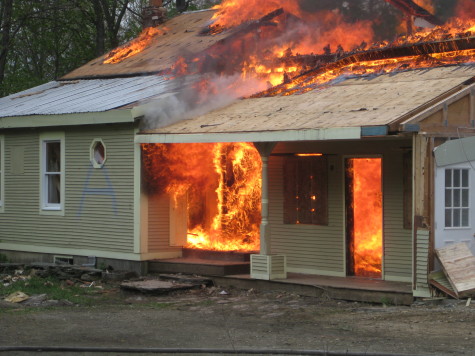 Rare and horrific tragedies should not be used to justify parent-blaming or hasty law-making.

Accordion Causes School Evacuation — and It Wasn’t Even Played
From “A Stranger Talked to a Girl” to “MY GOD WHAT IF IT’S A SEX TRAFFICKER?!?”

48 Responses to UPDATE! Girl, 11, Babysitting Her Siblings Could Not Save Them in Tragic Fire. Start the Parent Blaming?