Is there a war on parents in Rhode Island? Recall fzzyznaahh
that this is the state that once wanted to make it illegal for a child under age 12 to get off the school bus unless an adult was waiting there to walk the child home. (That bill was eventually scrapped.) Then there was the bill considered just a couple of weeks ago that would make it illegal to let a child under age 7 wait in the car, under penalty of the state revoking the parent’s license for THREE YEARS. That one is still in play. Now comes THIS LAW that is to be debated on Tuesday:

1 SECTION 1. Chapter 14-1 of the General Laws entitled “Proceedings in Family Court” is hereby amended by adding thereto the following section:

Age restrictions for children. – Children under ten (10) years of age shall 4 not be left home alone.

Children at least ten (10) years of age and not more than twelve (12) years of age shall 6 be allowed to stay home alone for brief periods of time, but not after 9:00 pm.

Children over twelve (12) years of age may be left home alone, but not overnight.

Parents and legal guardians should use their judgment to access the maturity and responsibility of their children and to discuss safety procedures and precautions before deciding whether to leave their child(ren) home alone.

Once again we have the lawmakers interfering with basic parenting decisions. Why? What if I need to get medicine for my 8 -year-old? I have to drag her, vomiting, to the store with me? What if my 11-year-old is reading and it’s 9:30 at night and I have to go pick up his dad from the train? I have to take him with me or risk losing him to foster care? That’s a better fate for him than a mom who trusts him to stay home alone with a John Green book for half an hour?

Why is the state so obsessed with making these laws that leave parents no room to decide what works best for them and their families? How does it make children safer to take away their parents’ judgment and flexibility? And since when do you have to be 10 to spend any time alone at home? Where does that recommendation even come from? What is it based on, besides a number pulled out of thin air? In the rest of the world, kids age 7 walk to school on their own. In Japan, kindergarteners do it. Why do Rhode Island’s lawmakers think their state’s 10-year-olds are so helpless?

These laws are preposterous. They assume it is the government’s job to dictate family life. They criminalize maturity in children and common sense in parents, and turn mundane decisions — like running out to do an errand — into legal minefields.

So: If you live in Rhode Island and can get to the state legislature on Tuesday, do. A reader who alerted me to this bill, Randall Rose, is organizing parents who’d like to put in a word or two. He says the hearing will be in room 313 of the State House (Senate Judiciary Committee), 80 Smith St., Providence. He adds that “It’s best to be there by 4:30 because sometimes they start then, but if you can’t make it till 5 pm or a little later, there’s a chance they’ll still be going then.” His email is: [email protected] .

Good luck, Rhode Island! Tell the lawmakers we know they are “thinking of the children,” but this bill will make criminals out of fine parents, and prisoners out of competent kids.  You might also remind the lawmakers that most of them spent some unsupervised time before they were 10, too.(Back when the crime rate was higher than it is today.) Do they wish their parents had been arrested? – L. 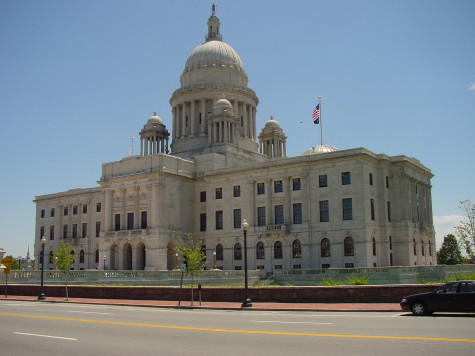 Rhode Island’s “We care more about your kids than you do” House.

“Officer, Some Noisy Kids are Playing Basketball in the Street!”
Even Pre-K Gives Snow Day Homework

66 Responses to Rhode Island Proposes NEW Insanity: “Children Under 10 Shall Not Be Left Home Alone, Even Briefly”