Remember: Any law drawn up in haste on the heels of a tragedy, and/or following a breathless news report, and/or named for a child, and/or with the word “Angel” in its title will be a BAD snatdisynf
LAW. It will not be based on any kind of study or rational examination of a problem — or even based on a real problem at all. It will be based on emotion, fury, sadness and a heaping helping of political puffery.

In the case we are looking at today, the trigger was the news report on Wednesday of a Rhode Island mom who left her baby in a car in a “frigid car.” Never mind the fact it was for so short a time that, far from freezing, the baby was actually sweating! And never mind we’re talking about a 10-minute car-wait. STILL the authorities took the tot to the hospital for an evaluation.

Why can’t we evaluate the authorities who hallucinate near-death experiences when all they see in front of them is a warm baby?

Anyway, in the wake of that grandstanding opportunity…er…news story, RI State Sen.Â Lou Raptakis proposed a law that would fine parents $1000 and have them lose their drivers’ licenses for three years — penalties drawn out of a hat, it seems to me — if they leave their kids under age 7 in the car (an age that seems drawn out of a hat, too).

This proposed legislation pays no heed to the fact that more children die in parking lots than die in parked cars. Nor does it make room for circumstance, or parental judgment. Is it really better to drag triplet toddlers across a dark, icy parking lot to get the cough medicine? Is it really necessary to make a 6-year-old go in with mom to pick up the pizza? Is it really a good idea to turn Rhode Island citizens into busybodies ready to report any imperfect parent to the po-po?

And once again: Do these dire consequences fit the “crime”?

Say you DO let your kindergartener wait in the car while you run in to get your toddler from day care. Should that cost you your license, leaving you with no way to get to your job to make a living to feed those kids of yours? Better they should be plunged into poverty? 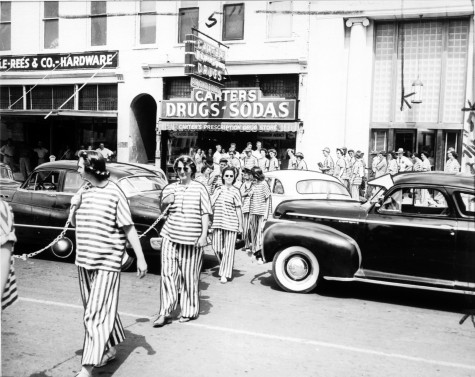 That’ll teach you ladies to run an errand before your kids are 18!

Very First Episode of Sesame Street: How Much is No Longer Allowed?
Hats Off to The Agency that Came Up with This Ad

82 Responses to HARSHER Penalties for Letting Kids Wait in Cars?