Readers teesddhsdb
— I am honored to present this brilliant piece by Jan Macvarish, a research fellow at the University of Kent and co-author of the book Parenting Culture Studies, which asks how come the way we feed, talk to, and play with our kids has become the stuff of public debate and government policy? (Boldface is mine.) – L

Last week, a Free Range Kids’ post, We Cannot Mold Kids Into Exactly Who We Want Them to Be, kindly drew attention to our latest report. Now I’d like toÂ say a little more about our analysis of the adoption of â€˜brain claimsâ€™ by British politicians in recent years.

UK parents have become accustomed to hearing that they need to be more involved in their childrenâ€™s homework, to monitor screen time more closely, to second-guess the schoolâ€™s latest rules for what constitutes a healthy lunchbox, to ensure that little girls don’t dress in ways which might be construed as â€˜sexualisedâ€™, not to mention the overwhelming admonition, from conception onwards, that Â â€˜breast is bestâ€™.

From the late 1990s, British politicians of all shades have talked of parenting as a problem.

Amongst other social problems, parents have been blamed for poverty and lack of social mobility, physical and mental health problems, obesity, crime and violence. And so the everyday choices of family life are said to be significant not only for individual children and their families, but to be the very stuff which determines societyâ€™s future. A growing feature of policy directed at improving parenting has been the incorporation of â€˜brain claimsâ€™: citations of neuroscientific studies, dramatic statements from child neuro-psychologists and images of brains, apparently atrophied by parental neglect: 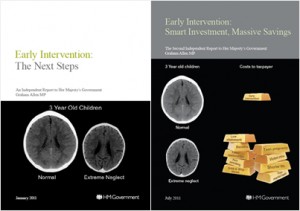 This is your brain on imperfect parenting.

US parents will already be familiar with brain-based parenting expertise, advising parents to maximise their babiesâ€™ cognitive development from gestation onwards, to fully exploit the 0-3-year-old window of the â€˜amazingâ€™ infant brain. Many UK parents, too, will have bought into the brain-stimulation trend, playing Mozart CDs to their bumps, sitting their babies in front of Baby Einstein DVDs and hanging black and white toys above the crib.

But what is noticeable in policyâ€™s use of neuroscience is that it never speaks of maximising chlidrenâ€™s intelligence but rather employs the authority of scientific â€˜evidenceâ€™ to make doom-laden â€˜now or neverâ€™ pronouncements on the need for ever earlier state intervention into the lives of families. If parents are not trained to attune to their babyâ€™s neurological development, it is argued, their offspring will not develop emotionally and socially, this will, in turn, impede their intellectual development when it is time for formal school. Ultimately this will impede social mobility and reproduce current social inequalities.

Although brain advocates argue that novel insights from neuroscience mean that â€˜we now knowâ€™ what babies require and what kind of training parents need, in fact, brain claims entered a culture in which there is already a strong presumption that â€˜something must be doneâ€™ about parenting.

The images and vocabulary of the brain are used to strengthen an imperative for particular interventions with parents assumed to lack the skills or emotional sophistication, to relate to their babies in ways that will secure their development.

As readers of this blog will be well aware, the idea that the early years have lifelong consequences because of their significance to brain development places incredible pressures on parents to get it right. This applies to the twenty-something with a surprise pregnancy, who worries how her partying might have affected the fetal brain, to the thirty-something professional mother worried about achieving a sufficiently strong attachment before the end of her maternity leave, and to the poorer young mother, assigned a specialist nurse practitioner as part of the Nurse Family Partnership, to school her in ways of singing, reading, touching and talking to the baby that will â€˜fire up the neuronsâ€™.

Concerns are also being raised by scholars of social work that â€˜neurotrashâ€™ [shoddy or mis-interpreted brain research] is being used to argue for increasing numbers of forced adoptions, with birth parents prejudged as inadequate, having their babies removed by social services and placed in adoptive families, before irreparable harm can be done to their neurological development.

As respondents to Lenoreâ€™s post about our study clearly illustrate, thinking through the prism of the infant brain unhelpfully reinforces parental determinism — the idea that parents are the ultimate â€˜architectsâ€™ of the grown childâ€™s life — and reinterprets family practices of love and care as socially significant, therefore meriting external evaluation and improvement from experts, whether commercial or state-led.

Further information about the project and its findings can be found here.

Teacher Shows Kids Carpentry Tools, Gets Suspended on “Weapons” Charge
Mom Mad City Bus Allowed Her 8 y.o. to Ride: “Anything Could Have Happened!”